This post is in partnership with China Eastern Airlines.

My new goal in life? To always fly business class– well, at least for any long haul flights between Asia and the US. A girl can dream right??

Fifteen(+) hours can be tough in economy when you’ve got no space to sprawl out and stretch your legs. Even though I’m short, sitting in one position starts to become uncomfortable and sleep is hard to come by. And while this probably helps avoid jet lag, I’d rather take the comfortable route.

I recently got to check out China Eastern Airlines business class flying to and from Bangkok. I wondered how this airline would stack up to the other business classes I’ve experienced when 1) the ticket price is almost a third of other airlines and 2) my only previous experience with them wasn’t the most pleasant.

Since a lot of you often ask about flying business class, I thought I’d share what China Eastern Airlines business class is really like. 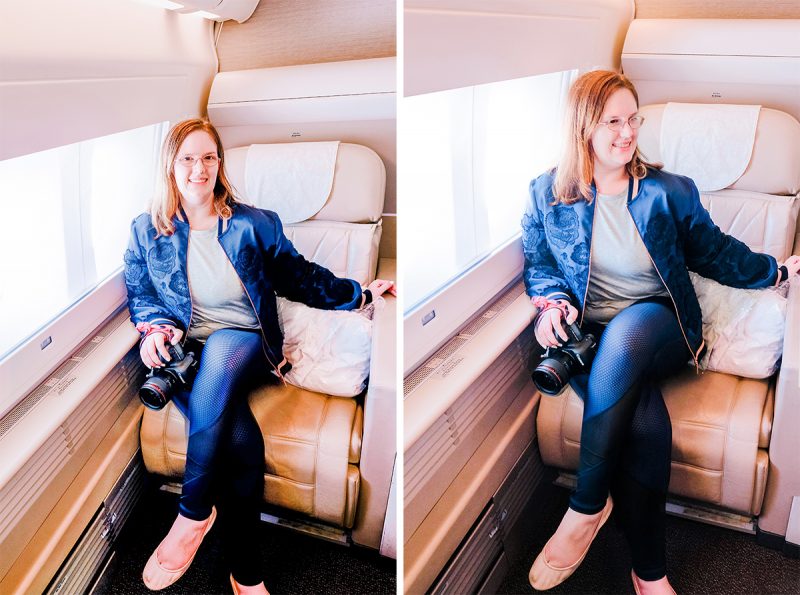 Since there are no direct flights to Thailand from the US our layover destination was Shanghai, hub to China Eastern Airlines, both on the way there and on the way back.

The transpacific portions (Los Angeles to Shanghai) were obviously the longest part of the journey, at around 14 hours, and this was done on a Boeing 777-300.

The shorter Interasia route was only around 5 hours and on the much smaller Airbus A330-200.

Honestly, the different types of airplanes mean nothing to me, but I figured I’d provide the specifics since I know a lot of you care and want to know! 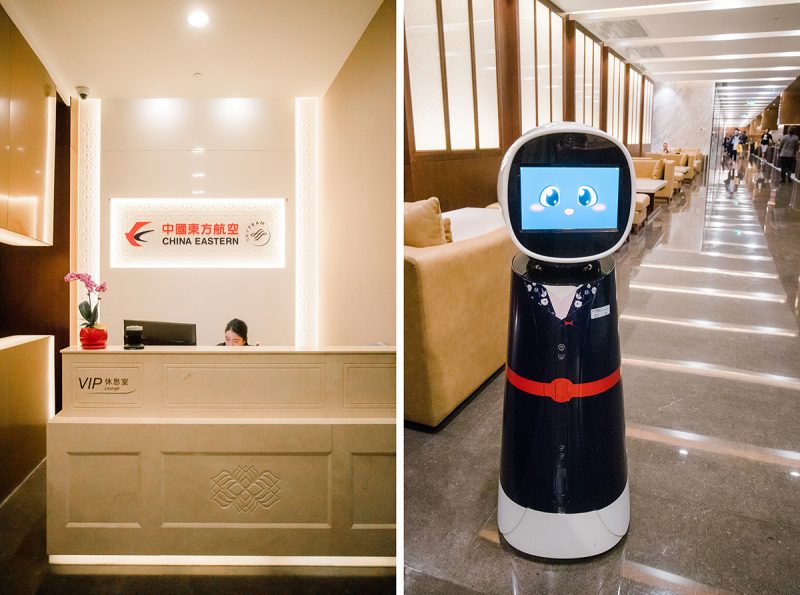 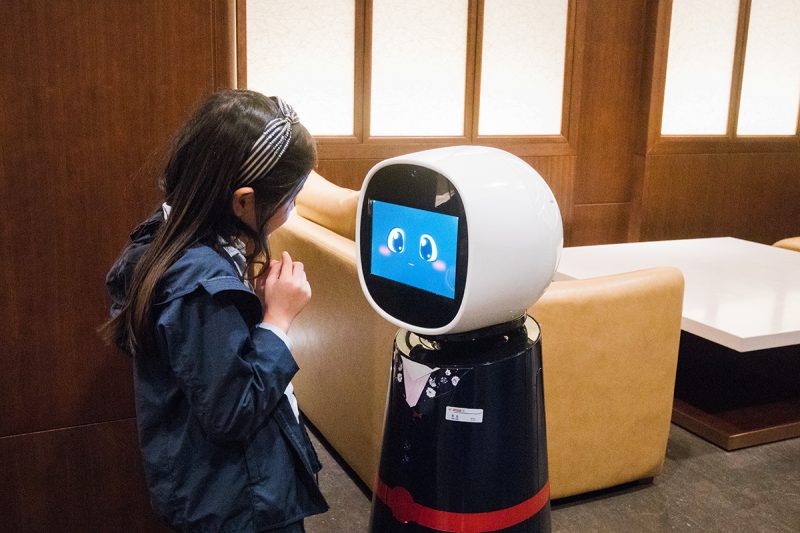 We had access to the business lounges before all of our flights. No matter what airport you’re in, lounges are great because they allow you a comfier and quieter place to wait before boarding.

When we were departing from Los Angeles and Bangkok we made use of the general SkyTeam lounges as that’s the alliance China Eastern Airlines is affiliated with. But when we were in Shanghai we got to checkout their flagship lounge.

After checking into the China Eastern Airlines Premium Lounge, we were greeted by a robot– which is something I had never seen before despite all my travel around Asia. She was there to inform you of any delays, in-flight services or simply provide you with the weather of whatever destination you inquired about.

While we thought this was cool as adults, a little girl who was also on our flight was completely enamored with her new friend. I could see how this would be a really magical experience for younger fliers!

In the lounge it was nice getting to stretch our legs, enjoy some hot food and have access to showers so we could freshen up after the longest part of our journey.

When it was our turn to board, an airport staff member came and escorted us onto the plane so that we could settle in before the mad dash of economy boarding started. 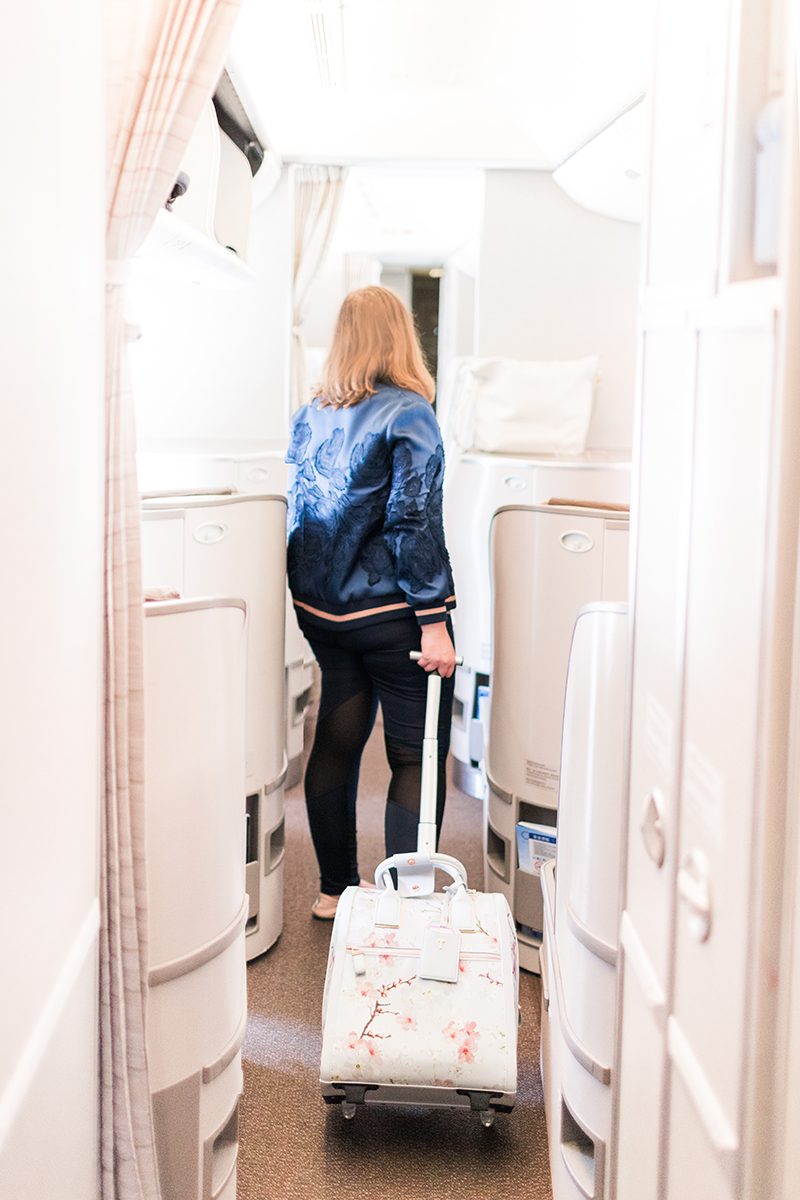 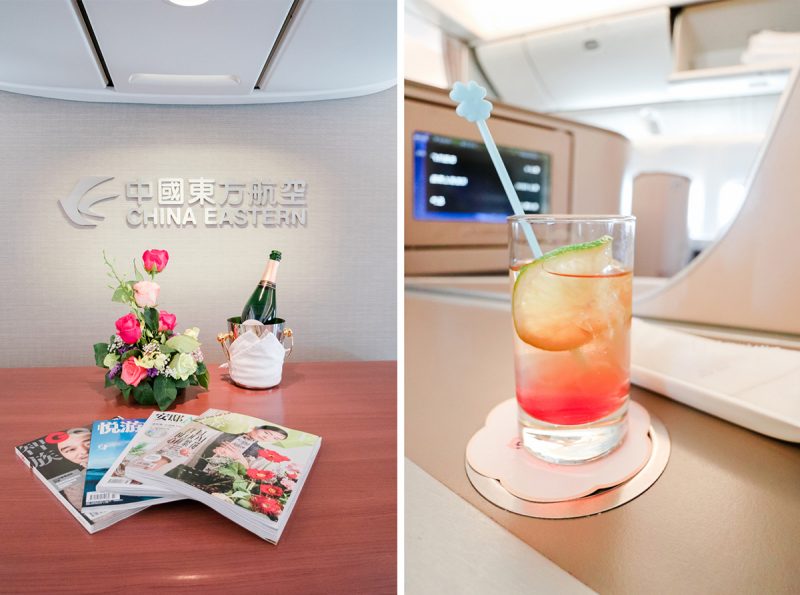 Stepping on board, we each had our own personal flight attendant guide us to our seat and put up our luggage in the overhead bins.

The one thing I really love about business class is that each seat has its own private overhead bin so you never had to worry about running out of space for your belongings (a common occurrence on Chinese flights) or someone rummaging through your things.

Once my luggage was up and I got settled in my seat, the flight attendant returned with a welcome beverage, in this case a glass of champagne, along with a menu listing all of the meal options for the entire flight.

She then asked if I would be needing a copy of The WSJ or any other newspapers and I laughed as I turned her down. I’m not that fancy.

To be honest, I’m pretty easy to please when it comes to flight attendants. I have yet to have a really bad experience, and I think most do a good job (or at least try) even when it comes to economy class. With that being said, you really do get outstanding attention in business class.

When you pushed the call button someone would appear right away– although it was always just as easy to flag someone down because they were rarely out of sight. The whole team did an excellent job and really made you feel well-cared for. 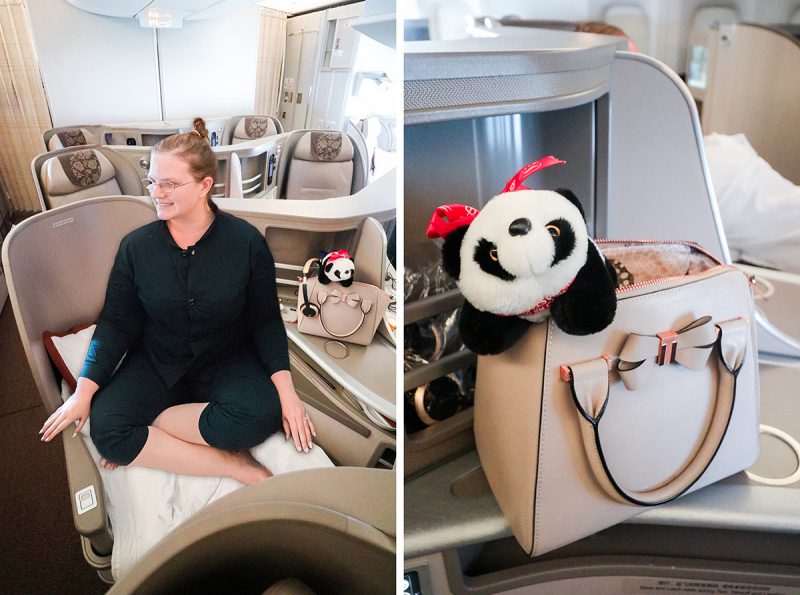 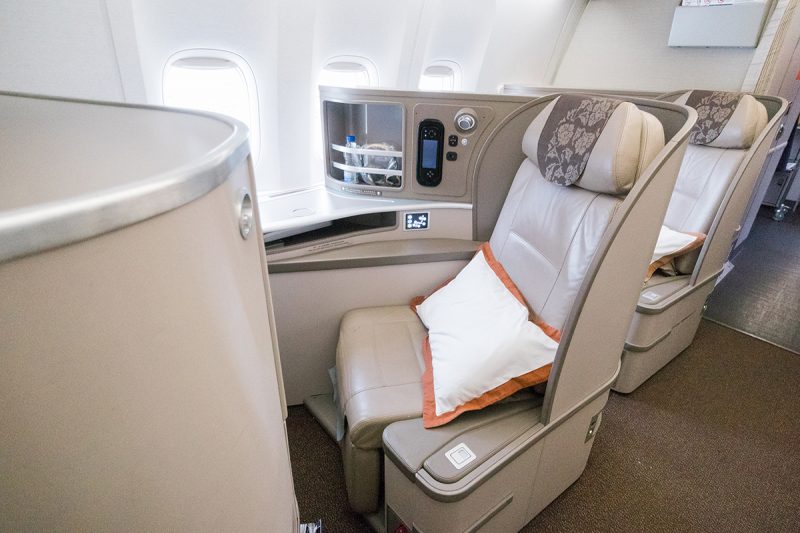 Obviously the seats are the prime reason anyone would fly business class on long haul flights.

In business you have your own little cubicle with extra wide seats and plenty of compartmental space. Each cubicle has direct aisle access, so say goodbye to feeling trapped when you (yay!) got the window seat but then (boo!) have to pee and the strangers sitting next to you are sleeping.

The only downside was that the two cubicles in the middle of the plane are positioned together. This is perfect if you’re traveling with that person, but I wished they had some sort of a privacy screen that you can pop up for when you don’t know that person.

So let’s get to the actual good stuff: the seat itself.

Your seat can go completely flat when you want to sleep, you can recline back to watch a movie or sit up to eat. I loved that you aren’t just limited to those three seat positions either.

All you have to do is hit a few buttons until the seat moves into the position you want. There’s three separate controls for the back of the chair, the part you sit on and the reclining leg rest.

It was really nice getting some work done on my computer while still being able to put my feet up. And I did notice way less post-flight swelling compared to when I fly economy.

And even better still? You don’t need to worry about people behind you or in front of you– you just do you. You know, like how it’s the worst when you want to recline to try and sleep in economy, but the person behind you has their tray table up and you can’t?

Each business class seat is also equipped with a large pillow, a much heavier blanket (seriously, this thing was more like a comforter than a blanket), slippers, and a toiletry kit complete with an eye mask, toothbrush, ear plugs and a few Clarins products to keep your skin hydrated during the flight.

Oh, and don’t forget to ask for a set of pajamas! This really helps you get all comfy and homey.

While flying business class won’t necessarily get rid of jet lag, getting good sleep helps, and I definitely got good sleep. After a bit of a delay at the airport, I was exhausted getting on the plane and I slept pretty soundly the first six hours, which was perfect since that was the middle of the night back home.

I always try to time my sleep to my final destination since it really does help with the time difference adjustment. 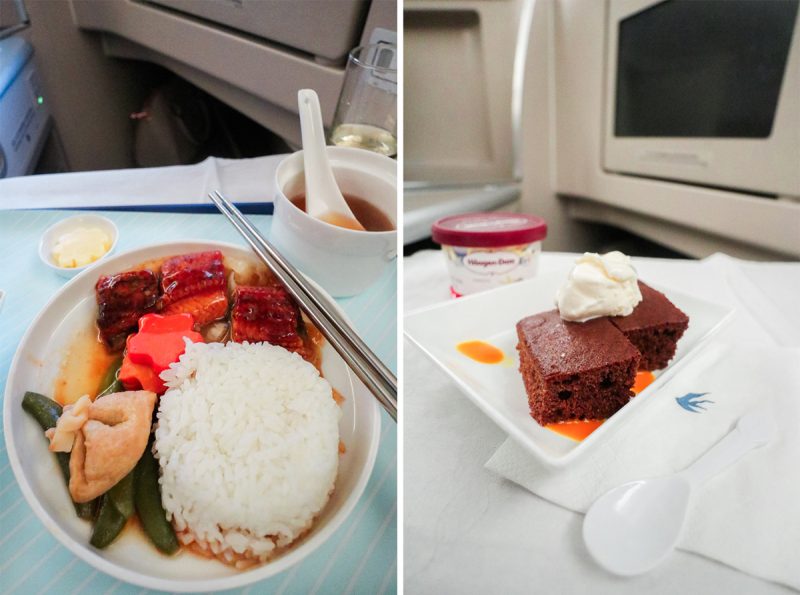 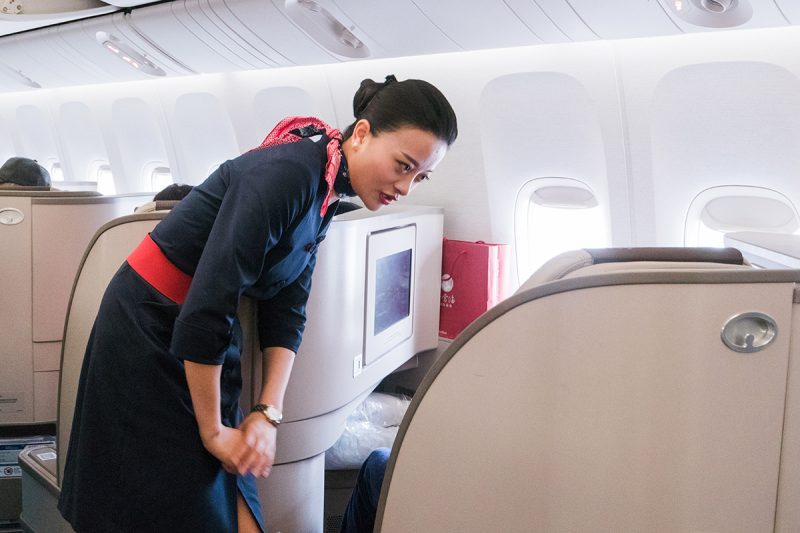 In business class meal time is like a fine dining experience… or at least they try.

You always know it’s food time because the flight attendants come around to pull your tray out for you and lay a white table cloth over it.

While in economy you’re usually given two choices for meals (or one because they ran out of the good option), in business we were given a full menu to choose from. You first would select Western or Eastern and then each category had about four different dishes to choose from.

Meals always consisted of a starter, an entree with a side, a cheese or fruit plate, followed by dessert… plus all the warm bread and cocktails you can consume.

While I’m weird and enjoy airplane food as is (what?? there’s something oddly fun about revealing what’s below that tinfoil cover) the business class meals didn’t disappoint.

The quality of the food is, well, as good as they can really do on an airplane, but I loved having better choices like pork belly or eel instead of your usual protein choice masked by some questionable sauce. 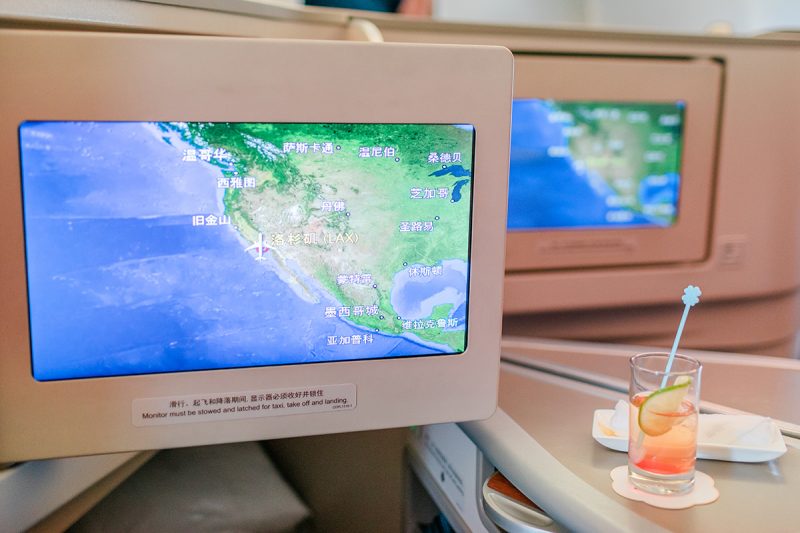 Each cubicle has its own 16″ LCD touch screen that swings out with on-demand entertainment. There’s a selection of movies, tv shows, games and music to provide you some entertainment during the flight.

The selection was a lot smaller than other flights I’ve been on, which is kind of disappointing when you have fifteen hours and want to pass the time.

There were only a handful of new blockbusters to choose from and a whole lot of Chinese films. Normally, I’m excited by this because it gives me a chance to catch up on movies I haven’t heard of since moving out of Hong Kong but the China Eastern Airlines entertainment system sadly didn’t bother to include subtitles for any of their Chinese films.

Underneath each screen is your own personal USB dock and power outlet to charge your phone and laptop. This worked perfectly since I had downloaded a handful of Netflix shows before take off, so I mainly watched those on the way home.

The 777s also have complimentary wifi for all passengers. Not just business class. At times it was spotty, and well, it is still Chinese-owned so you’ll need to VPN to access sites like Facebook, but I was impressed they even had wifi on a long haul flight and it was FREE. So who am I to complain?

Overall I can say I was indeed impressed. Flying business made a huge difference in both the on-flight experience and left me feeling totally refreshed and ready to take on Bangkok once we arrived.

And now that China Eastern Airlines offers direct flights to Shanghai from seven North American cities, it’s easier than ever to fly to Asia for less.

For those who don’t live near one of those cities, don’t worry! Being a part of SkyTeam means you can easily fly Delta when in the US and then transfer seamlessly to a China Eastern flight to Shanghai and beyond.

Since we fly back and forth to Hong Kong fairly frequently, I’ll certainly be looking into flying with China Eastern Airlines in the future. After all, I’ve got Shanghai Disneyland to visit in order to once again have been to every park and a layover in Shanghai would allow me to take advantage of the 144-hour visa-free stay without having a pay for a new Chinese visa. 😉