This post is in partnership with Desert Luxury Camp. 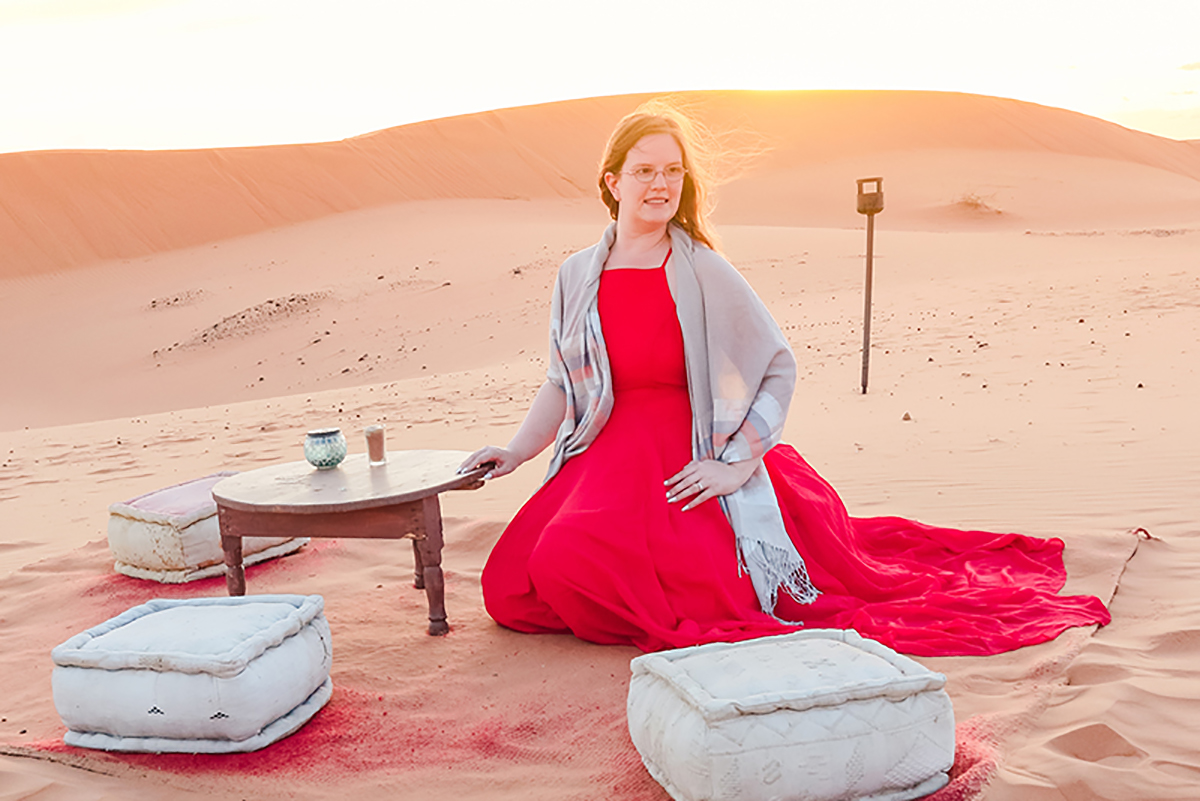 No trip to Morocco should be complete without a visit out to the Sahara Desert.

With its dreamy apricot dunes, the Sahara Desert is almost as large as the entire United States. Having never seen an actual desert in person, I knew we needed to make the journey out to see it.

While the journey might not be for the faint of heart — it’s long (10+ hours driving) and takes you through all different terrains, it was definitely worth it.

We booked a two-night luxury glamping adventure with Desert Luxury Camp. This entailed one night in the beautiful oasis of Skoura, one night at the luxury camp and private transportation with pickup in Marrakech and drop off in Fes.

The one really deceiving thing is just how dang big Morocco really is. Getting from city to city, while fairly straight forward with buses or trains from most major cities, still requires time. When I saw that this camp offered pickup and drop off in different locations, I knew this would be a perfect way to get from Marrakech to Fes while still sneaking in some much needed desert time!

Day One with Desert Luxury Camp

After spending a couple of fun days in Marrakech, we were picked up around 9am by Abdou who would be overseeing our entire trip with Desert Luxury Camp.

Leaving the city behind we made our way to the Tizi n‘Tichka pass, the highest in Northern Africa. The day had started our grey and rainy — not exactly what we were hoping for, but luckily the sun broke through as we began our mountain ascent making the ride a little easier.

The first part of the drive took us through the High Atlas Mountains; some of the tallest mountains I had ever been in at over 7,000 feet tall. Peppered with small Berber villages, the views were incredible. The ride; however, was not.

There were tons of hairpin turns, fun narrow mountain roads and everything else that a person who’s afraid of heights loves. I chewed on some ginger to calm my stomach and only occasionally looked up to take a photo or two. 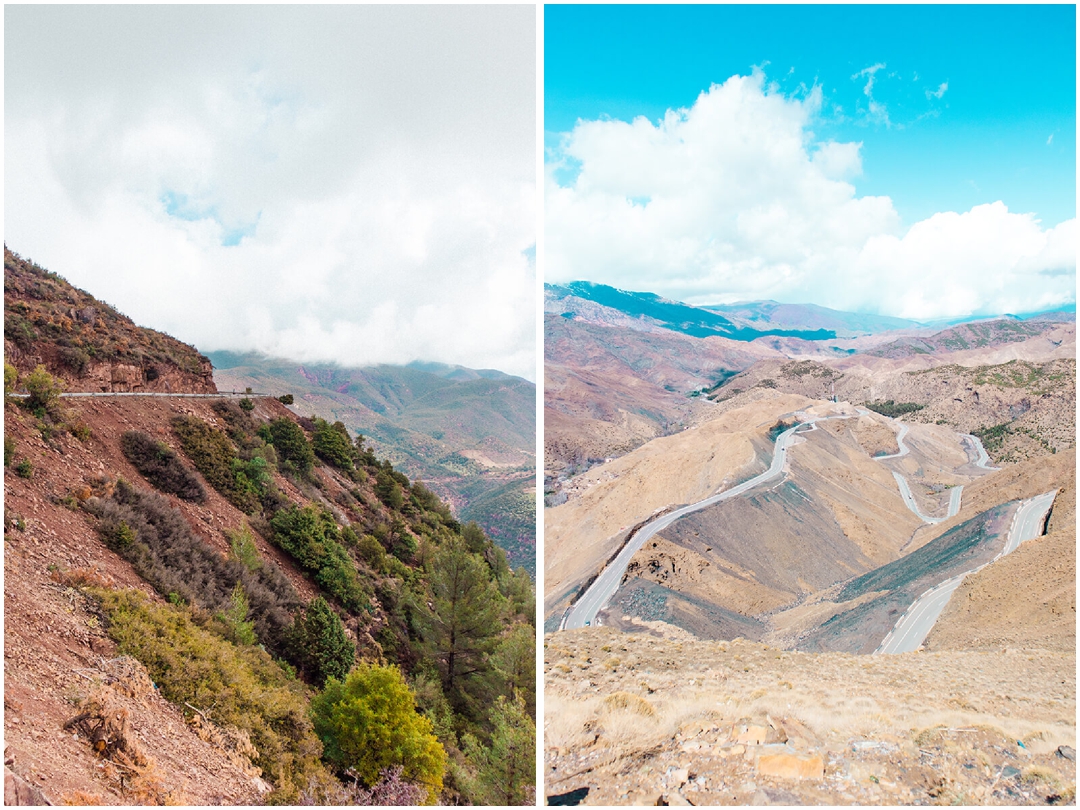 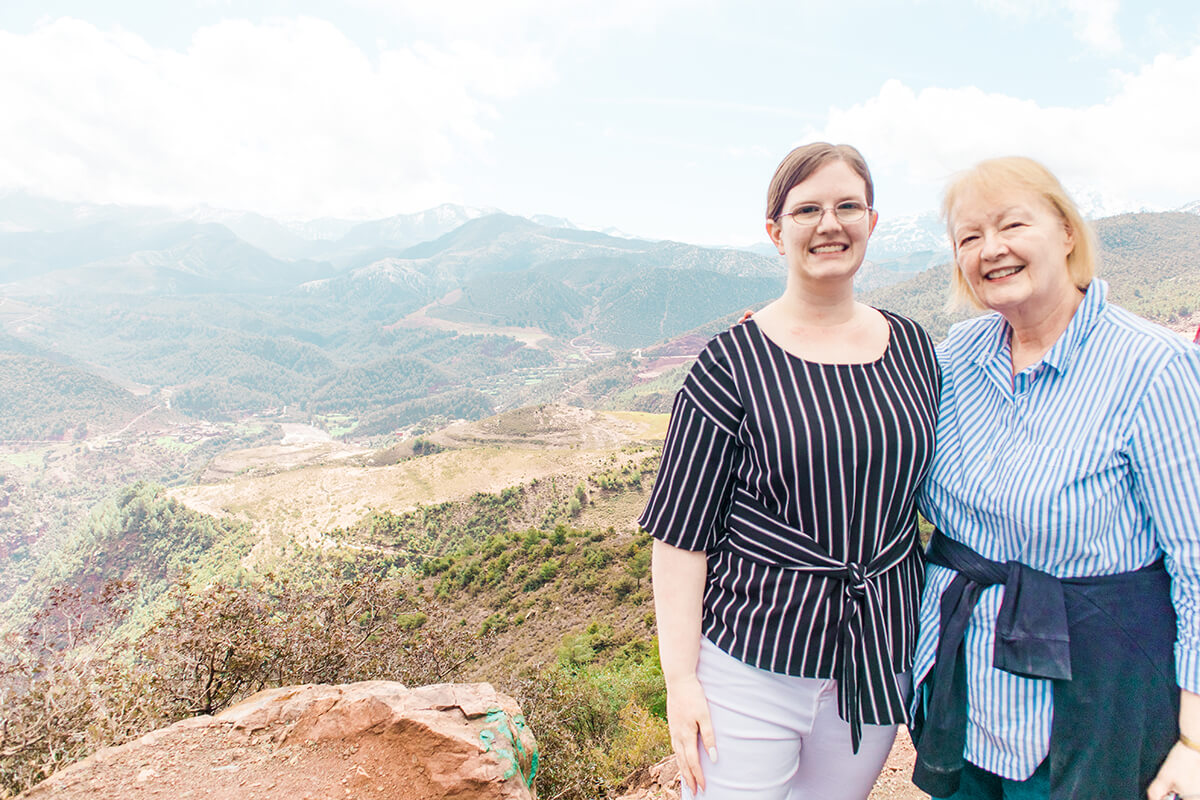 We climbed higher and higher. Suddenly we were above the trees and there was no fauna to be seen. Instead, we were surrounded by the very thing we were escaping Chicago from– snow.

I guess I hadn’t been prepared to see snow while in Morocco.

The descent through the Atlas Mountains was a lot easier. Once we reached the other side the landscape suddenly changed to what I’d imagine the desert in Arizona or California looks like.

We had just seen cities, snow, arid desserts, lush fruit fields and more all in the span of 24 hours. Who knew Morocco’s landscapes were so diverse?

It was crazy to see the California-desert like landscape with snowy mountains in the background.

After another hour or so we had finally reached our next destination, UNESCO World Heritage Site Ait BenHaddou. Made famous by countless movies I have never seen (like Gladiator), what interested me in this site was its use in Game of Thrones…and, you know, its history.

We stopped for a few photos and to enjoy lunch. A local guide came to meet us to show us around and he had actually been in extra in Game of Thrones! Pulling out his cell phone to show us photos of him in hair and makeup, I could already feel like I was being transported to the fictitious town of Yunkai. 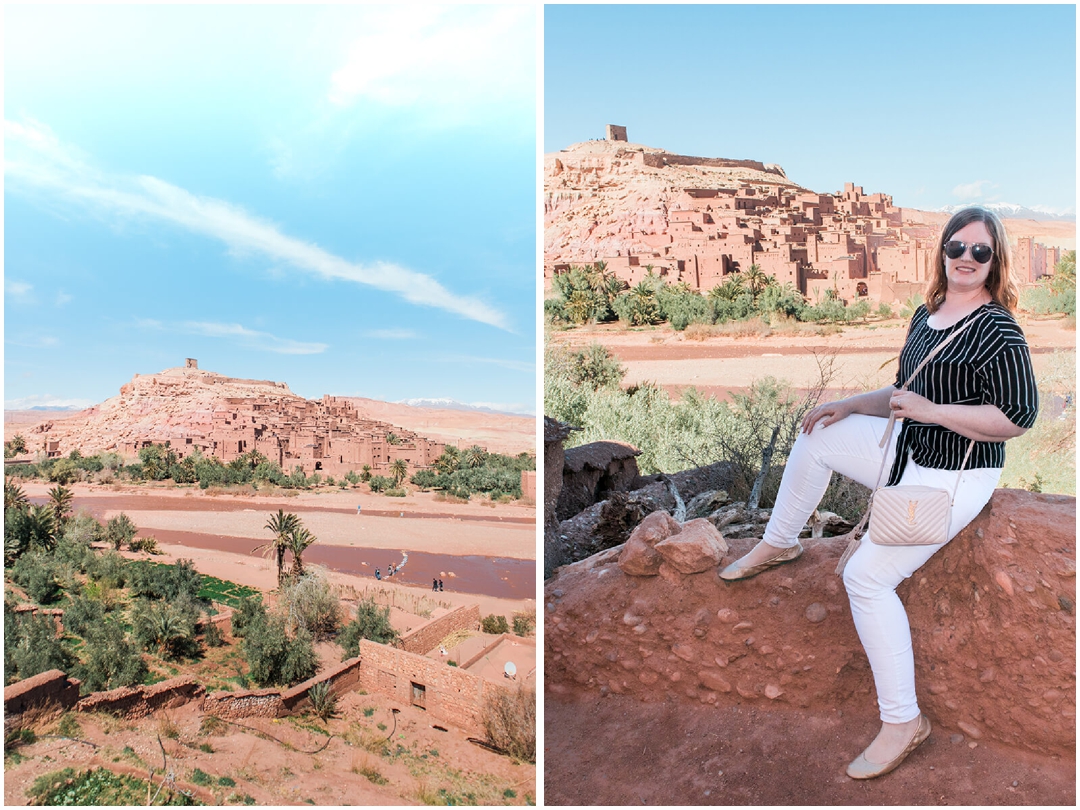 Then it was back to the car for another hour ride to Skoura.

An oasis filled with palm trees in the middle of the desert, we arrived to this little paradise just in time for sunset. Unfortunately, there had been a miscommunication and the hotel we were scheduled to stay at was closed for the day!

Abdou took great care of us and made sure we found a suitable alternative before driving off and boy did he do good!

While I’m sure the original hotel would have been great, the kasbah we ended up at felt like our own private palace. Literally.

For the first while we thought we were the only people staying in the entire hotel. With light growing scarce, we ran around like crazy taking all of the photos. Climbing up onto the roof, we caught the tail end of sunset surrounded by all the palm trees.

It wasn’t until dinner time that we found out another couple was staying there, but that was the only time we ever saw them. 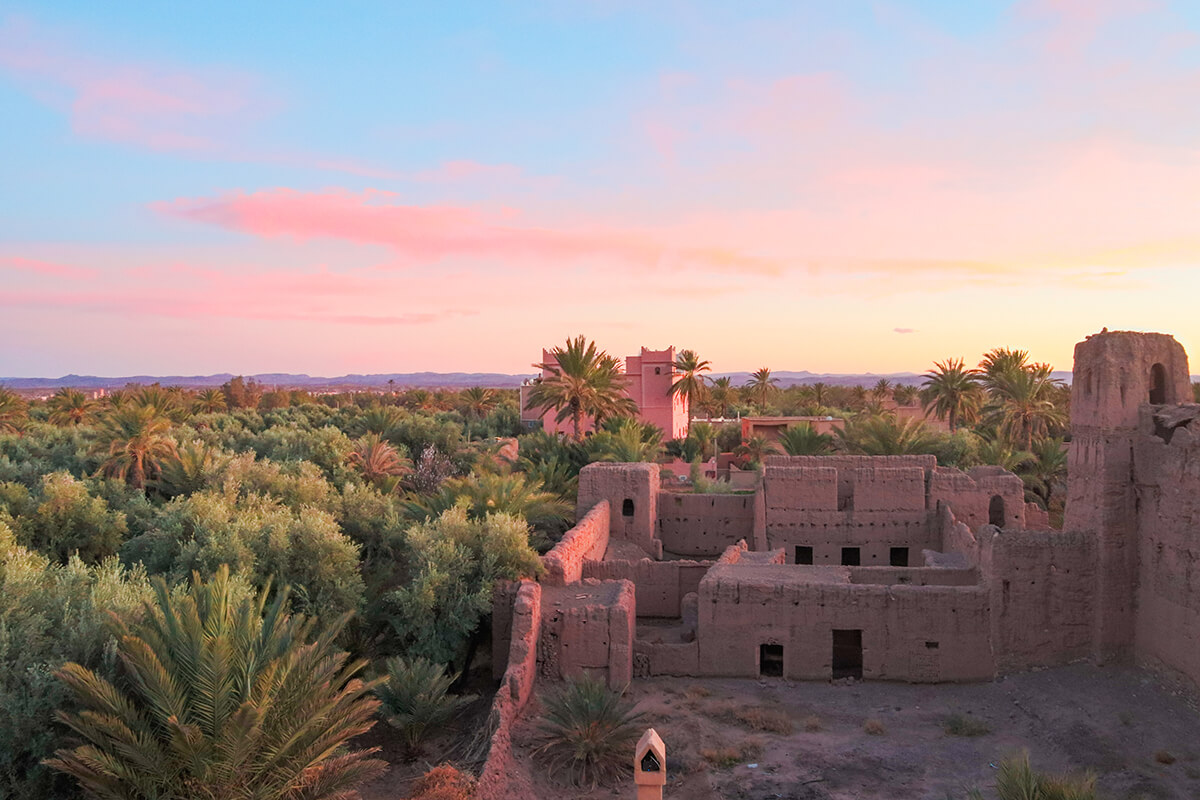 The next morning we started again, bright and early. After stopping by the famous Todra Gorge, it was time for another six hours in the car.

Finally we arrived at the Sahara Desert Gate. 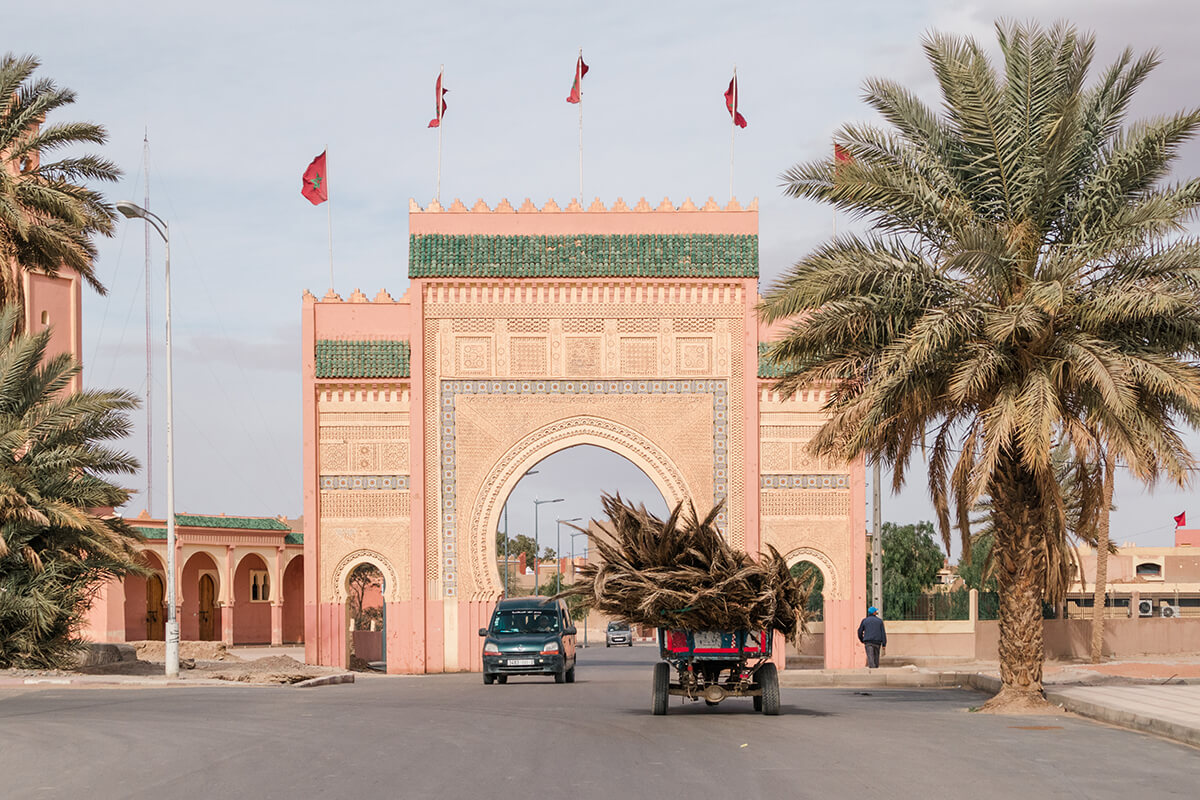 It was still another two hours of driving before we saw the gorgeous apricot dunes rolling up in the distance. With the sun about to start setting, they were almost magical looking.

To be honest, I had NO idea how large they were. I kind of just thought the desert was pretty flat with walkable dunes here and there. Man, photos are deceiving. Some of these dunes were over 600 feet tall — that’s like a 50 story skyscraper.

Approaching them was nothing short of incredible. 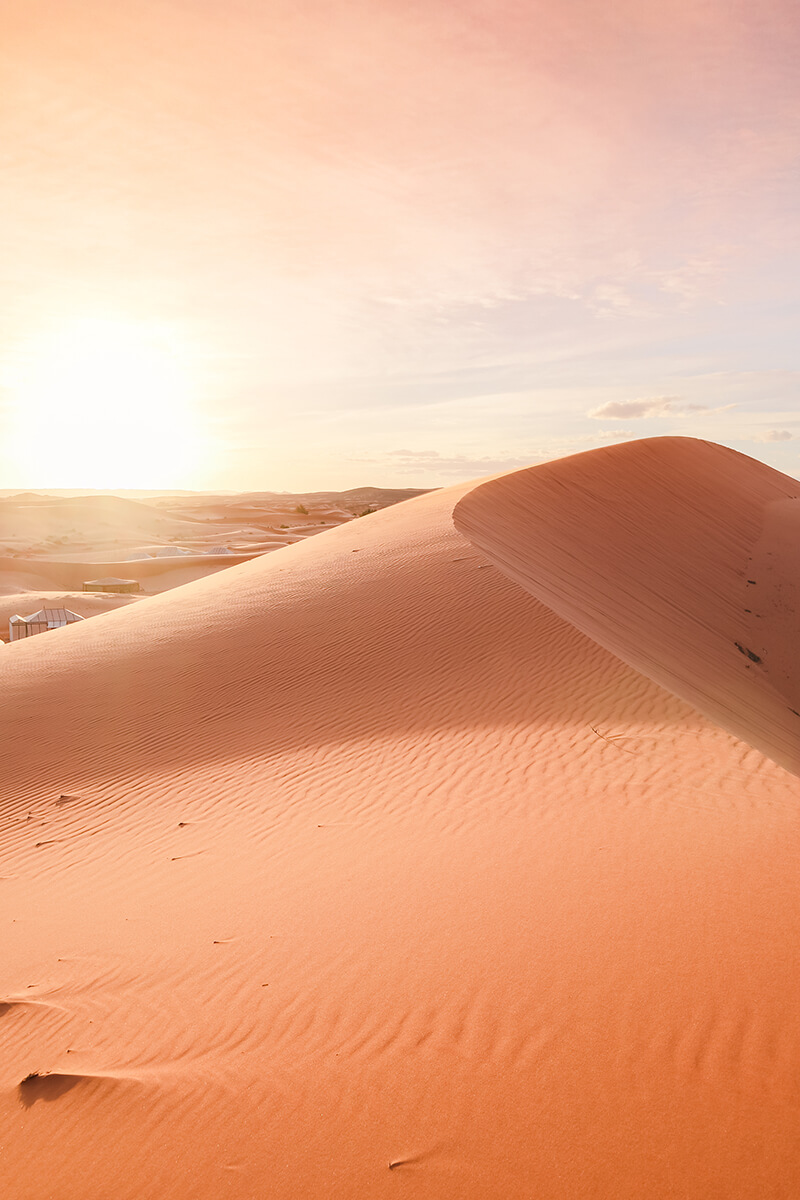 Passing the small desert town of Merzouga, we had arrived to our drop off point!

Along the way we had passed multiple other desert camps, but they were just a few feet off the road and barely in the desert. Luckily, that was not at all the case with this camp.

We hopped into a 4×4 and made our way slowly through the maze of dunes.

After another 25 minutes of driving, the 4×4 dropped us off so we could officially arrive at the camp in style– on camel. 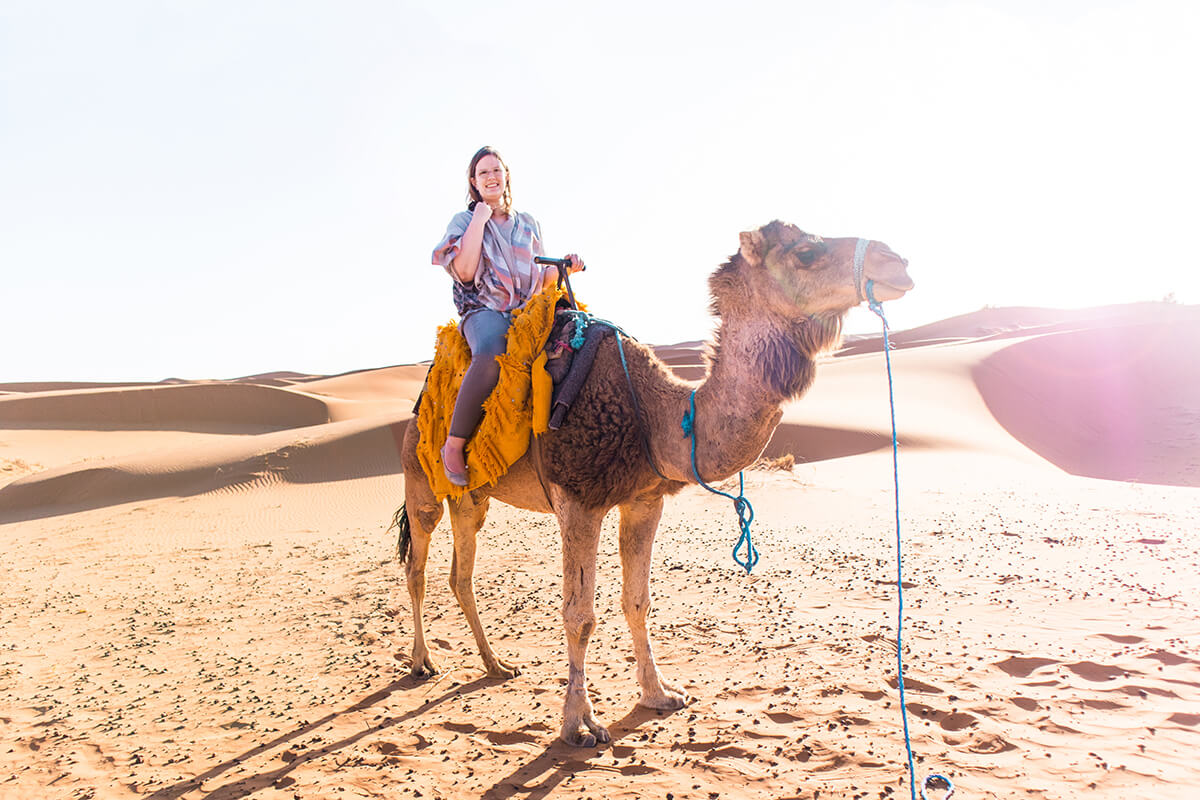 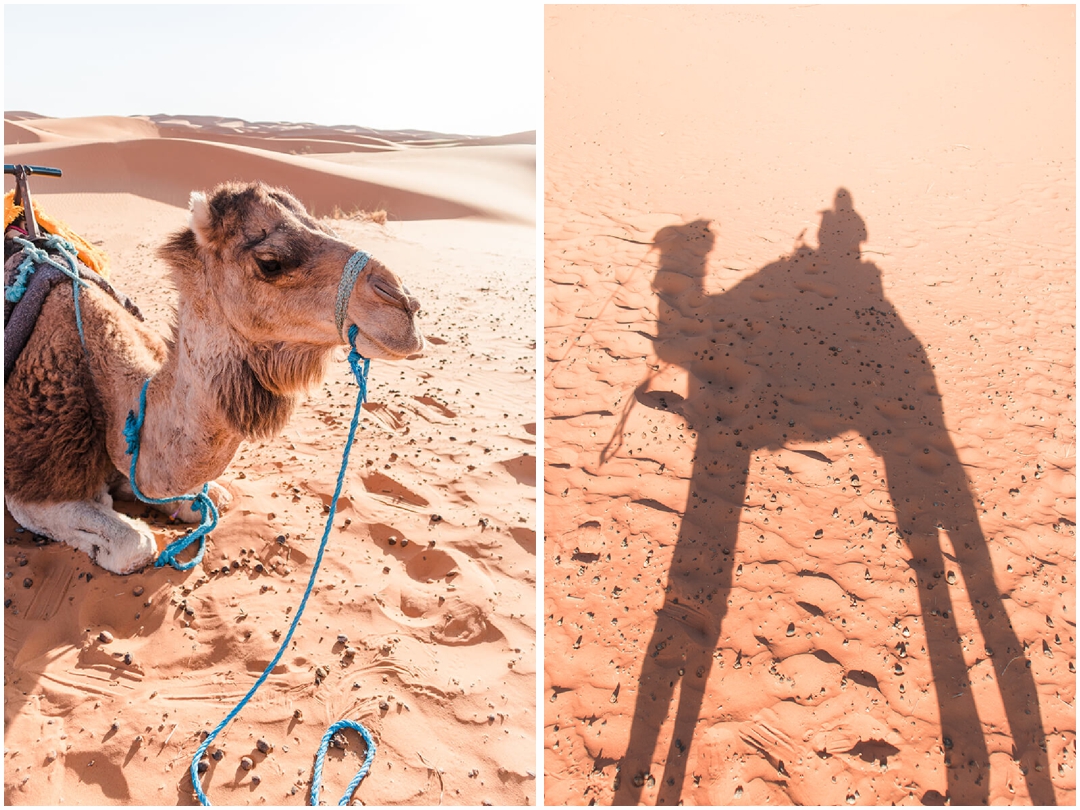 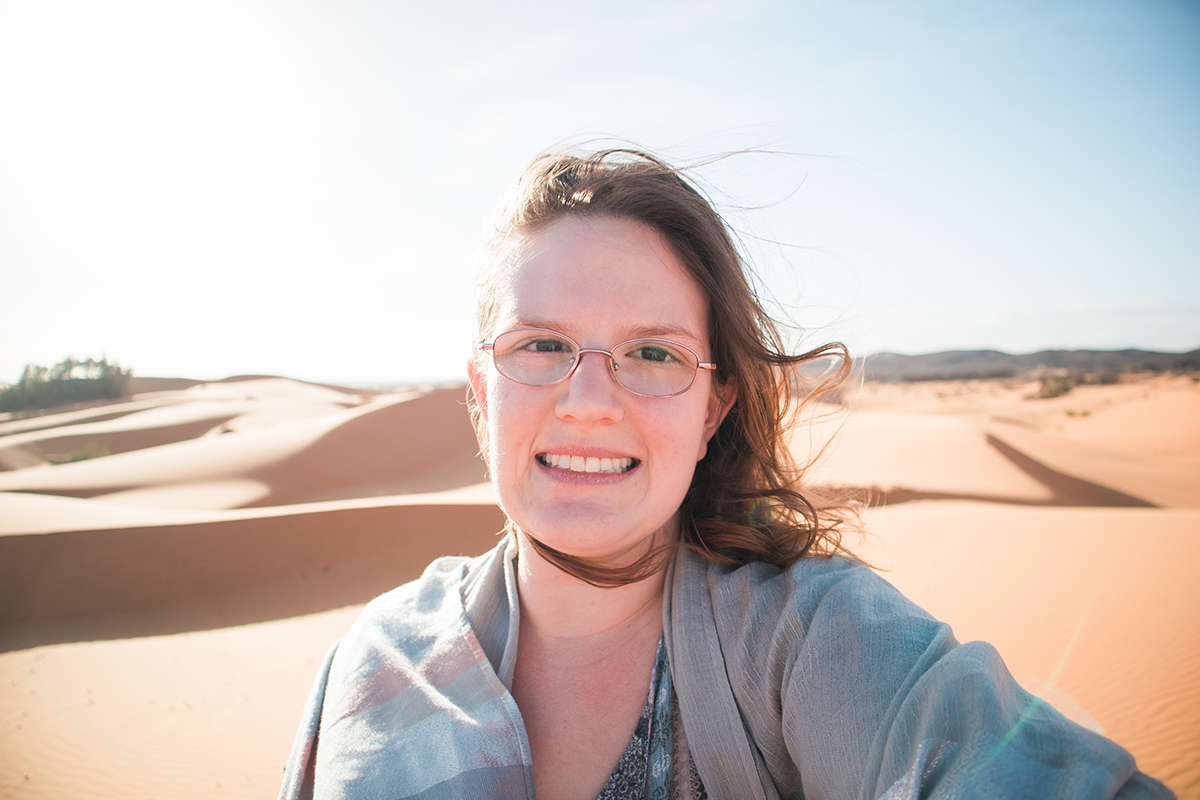 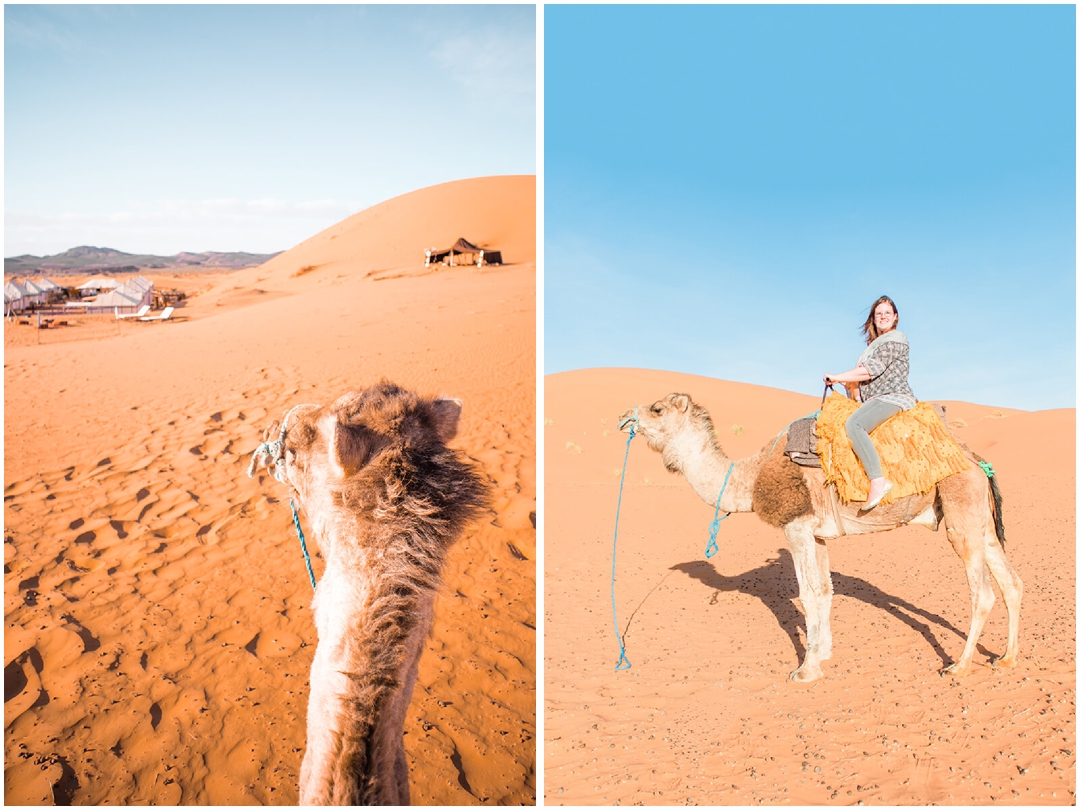 We trekked for about 45 minutes through the sand. Tall dunes looming ahead of us, I thought surely we’d go around them, but no, our camels hiked us right up and over. It’s truly incredible what these animals are capable of.

Then, we saw the camp in front of us.

It had taken us nearly two days to arrive here, but it was so, so worth it. 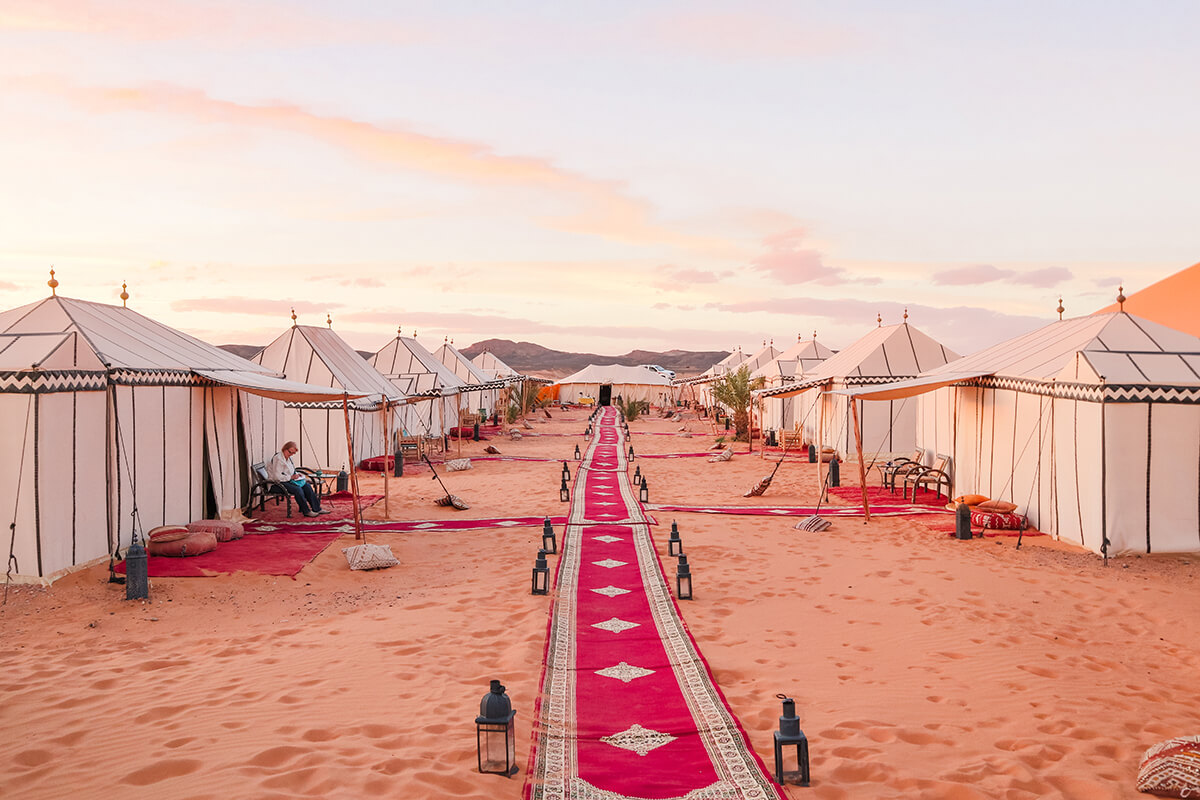 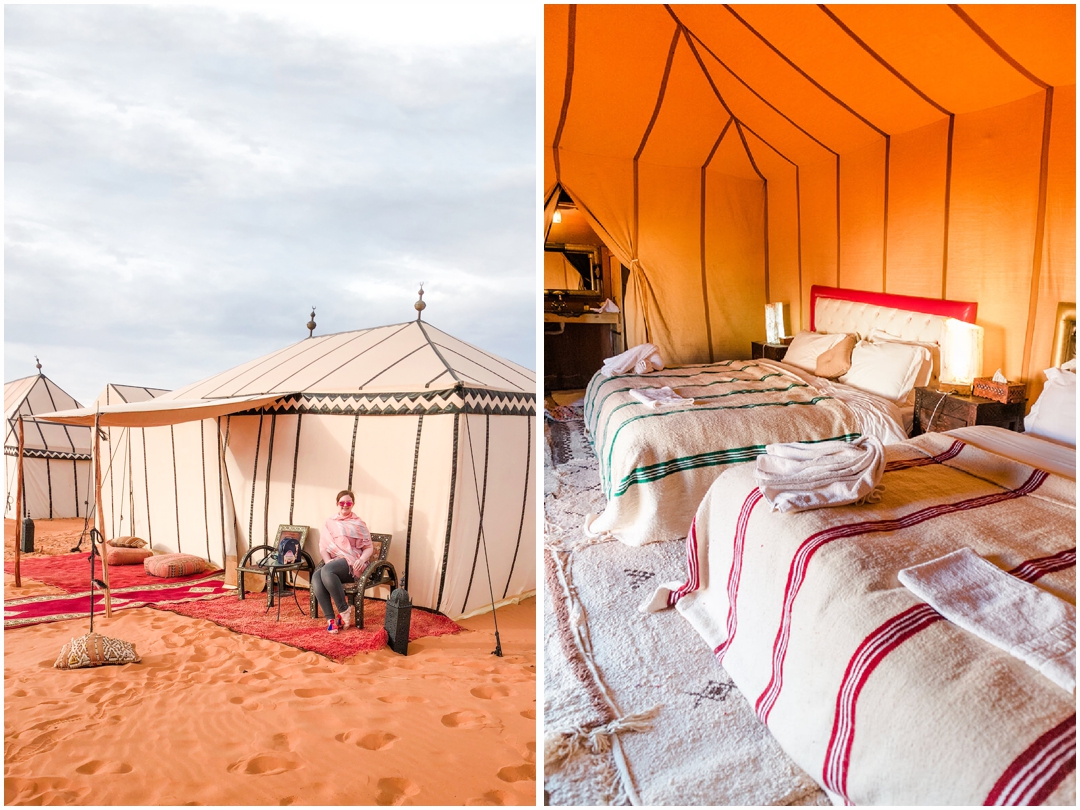 The tents were all lined up in two rows. Most of them were taken when we had been there, yet it still seemed so quiet.

Inside the beds were comfortable, each with an electric blanket to help with those cold desert nights, and the tents had full bathrooms with running water, warm showers and plenty of outlets for you to recharge your electronics.

While we didn’t get cell phone service, it was still nice that we could charge and be ready to go for when we reached Fes the next evening!

After getting settled in we had some free time before dinner. You could go hiking the dunes, try your hand at sandboarding or simply relax at camp. The great thing about Desert Luxury Camp was that you could do as much or as little as you wanted.

I decided to hike up a nearby dune to wait for sunset. Watching as the sun sunk below the horizon of sand was incredibly gorgeous. It’s just one of those things you have to experience for yourself. 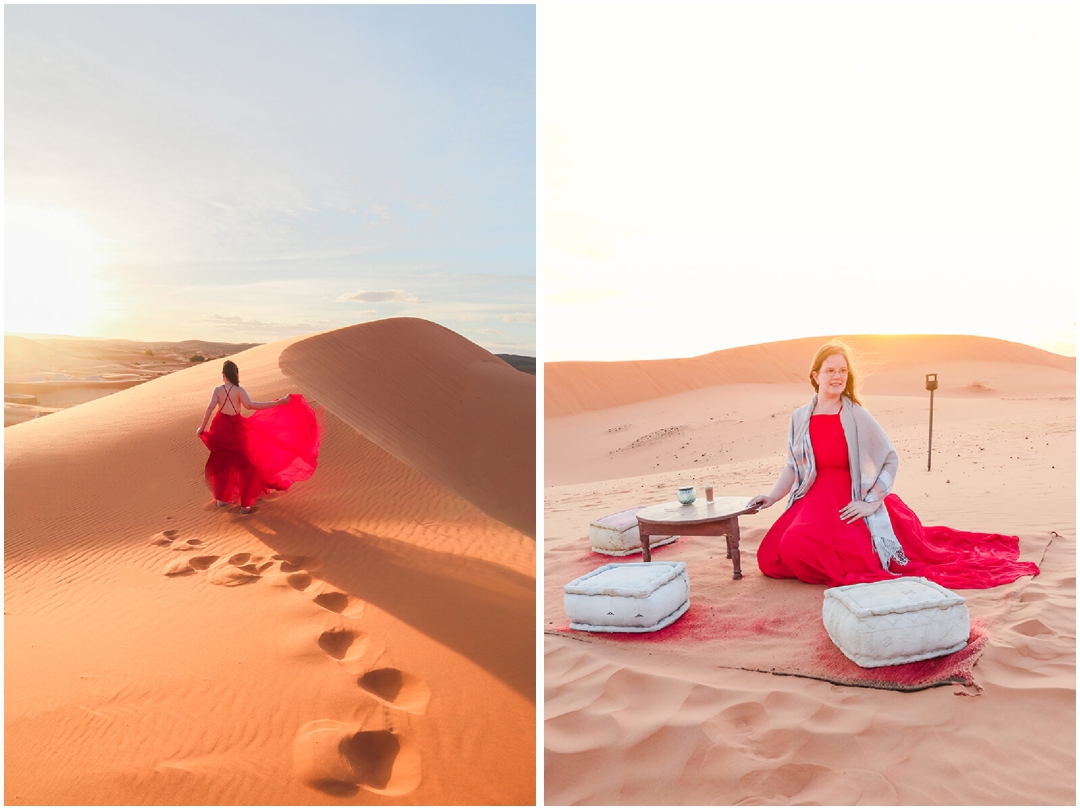 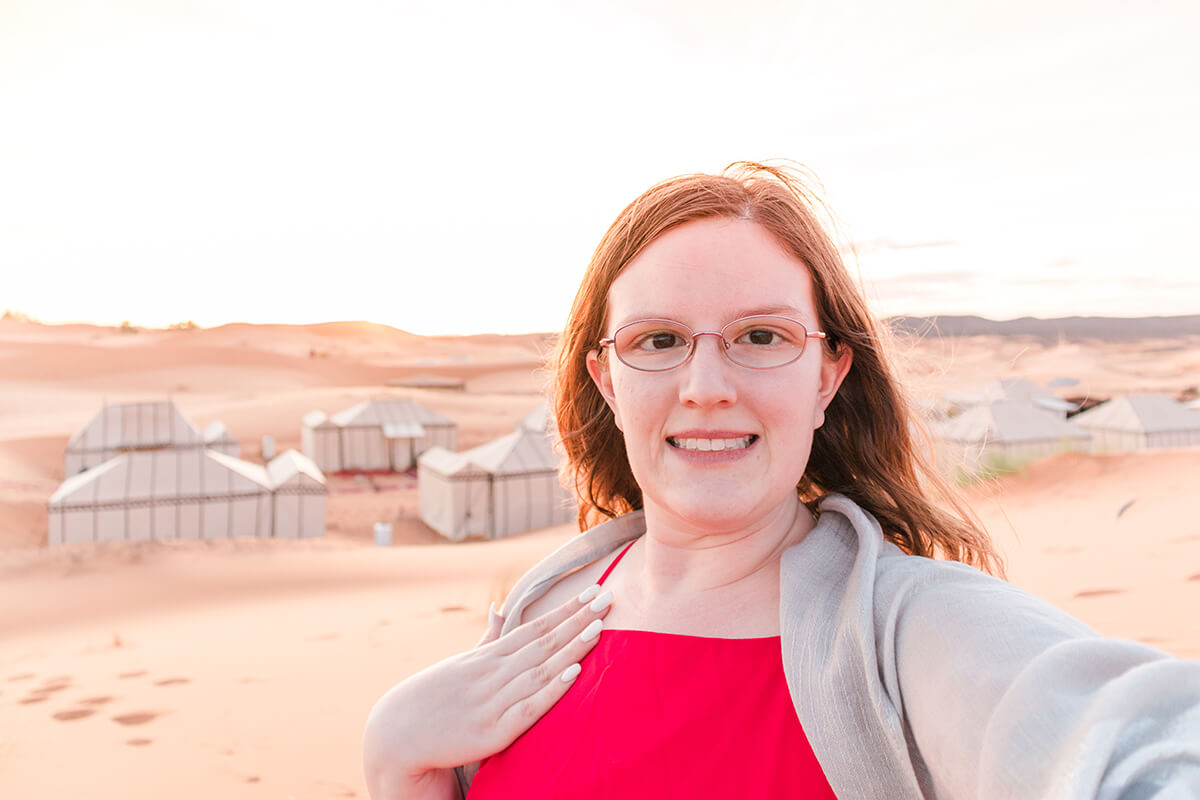 Evening at the camp was perfect. After way too much food for dinner, we enjoyed live Berber music and star gazing.

I unfortunately started to get a migraine, likely from all the car rides, but it was still easy to relax and unwind. Being disconnected from cell phone service also really helped with this!

Before passing out to one of the best night sleeps I’d had in a while, we did remember to set an alarm for sunrise.

It was pretty cold, but we made our way up the dune again to watch the world wake up. 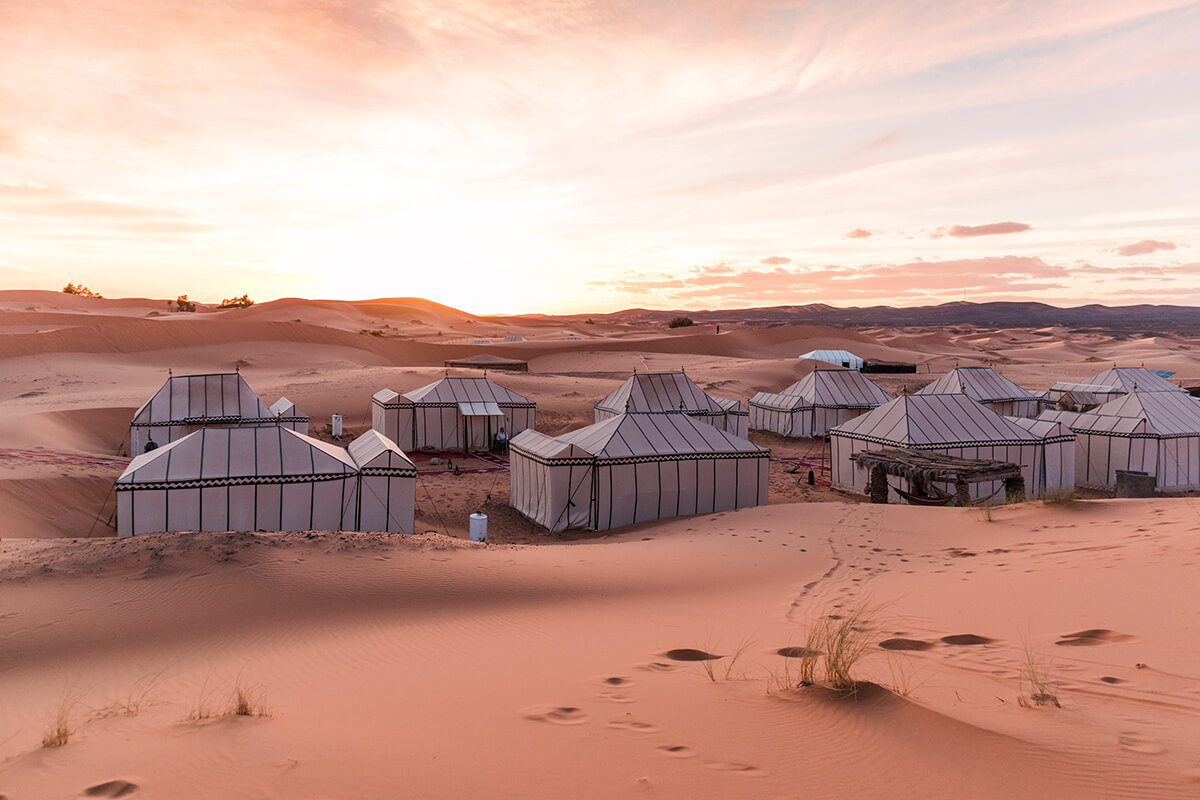 After a large breakfast, it was time to say goodbye to camp and we piled all of our belongings into the car.

This part of the journey was a lot more straightforward than getting to camp. There wasn’t a lot to see along the way, so we mainly stopped for a quick lunch and to stretch our legs.

We made our way through the Middle Atlas Mountains, which had nothing on the High Atlas, and after one final 8-hour car ride, we had made it to Fes.

So yes, the journey to and from the Sahara is long. It’s really not near any of the main cities in Morocco, so you do need to be a little dedicated to get out there. Just be sure to do your research. A lot of desert camp tours don’t actually take you to the Sahara (because it is so far) and some that do just camp off roadside so you only get to see the dunes in the distance… and that certainly wouldn’t be worth the drive!

I highly recommend booking with Desert Luxury Camp. They did such an amazing job and Abdou was absolutely wonderful in taking care of us for those three days! Glamping in the Sahara Desert was an experience I know I’ll never forget.

Tips for Glamping in the Sahara Desert 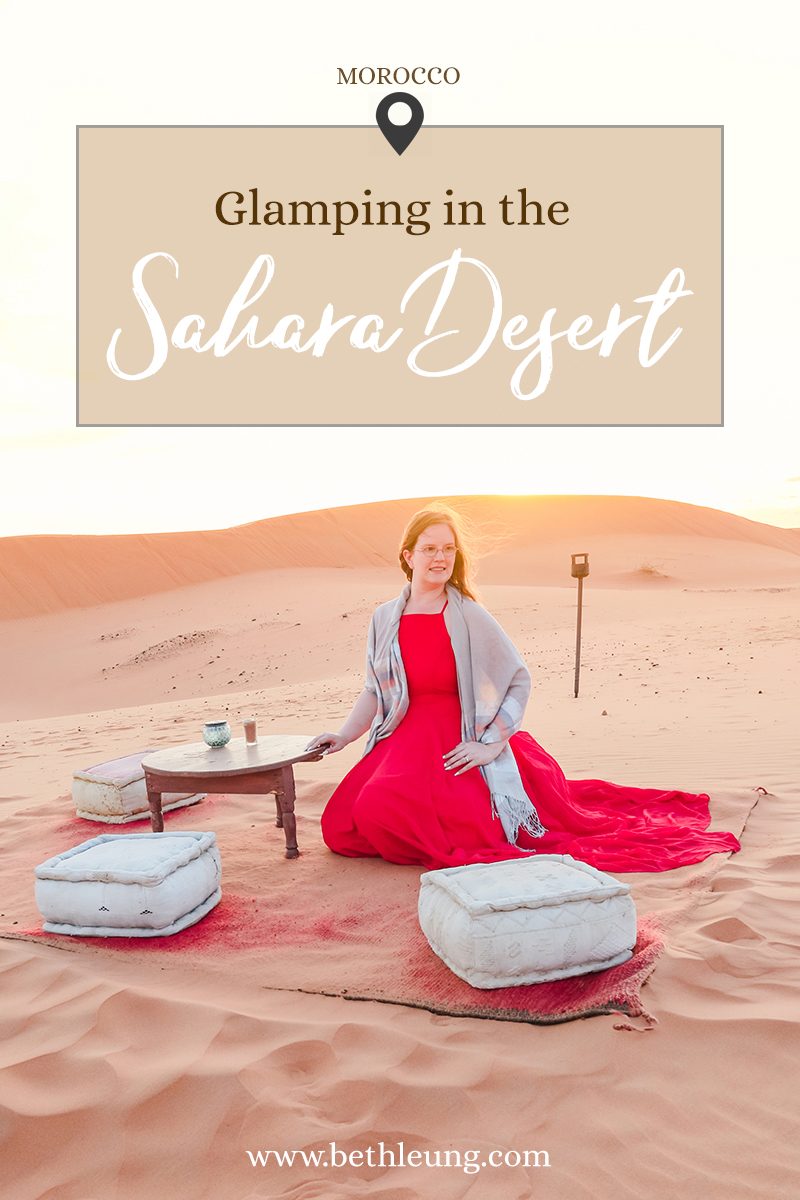 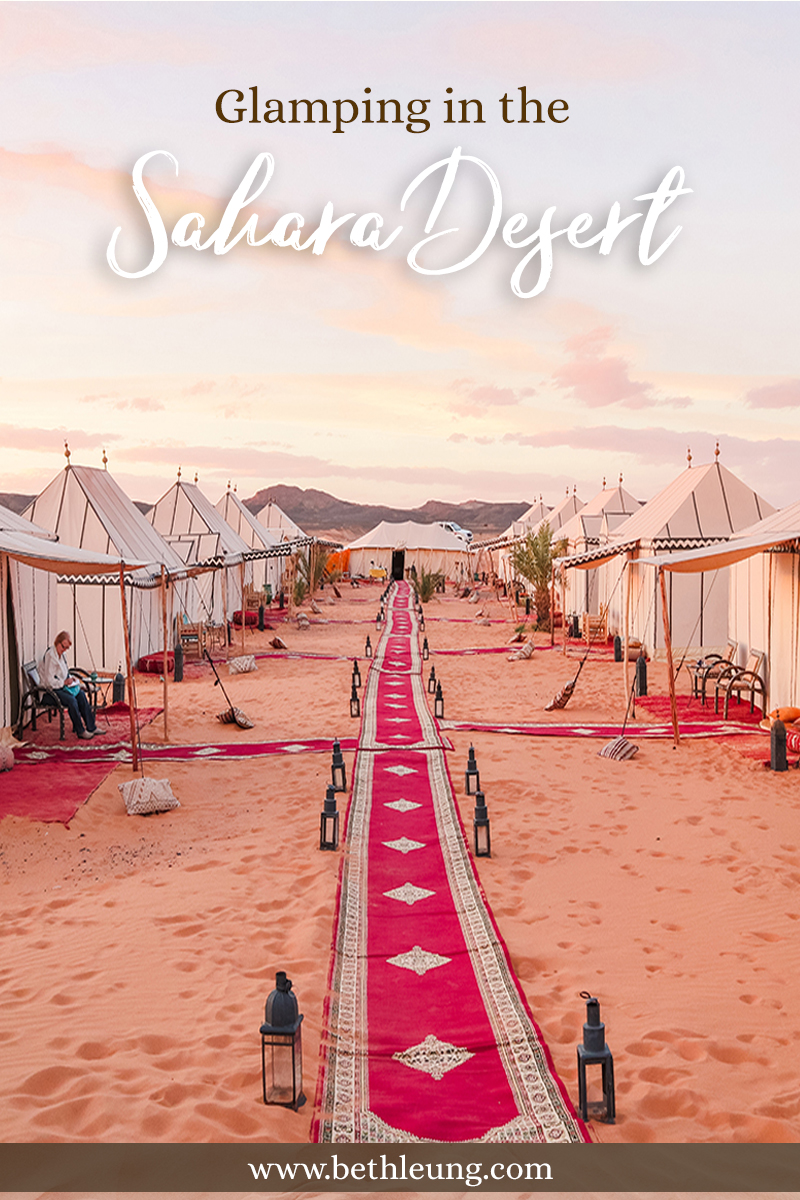