Never has it felt so good to be bad!

Disney has an all-new After Hours event for the summer and it’s villains themed.

This special ticketed event at Magic Kingdom will have you movin’ and groovin’ to devilish DJ sets, tasting deviantly delicious treats and watching a spectacular stage show with all your beloved baddies! 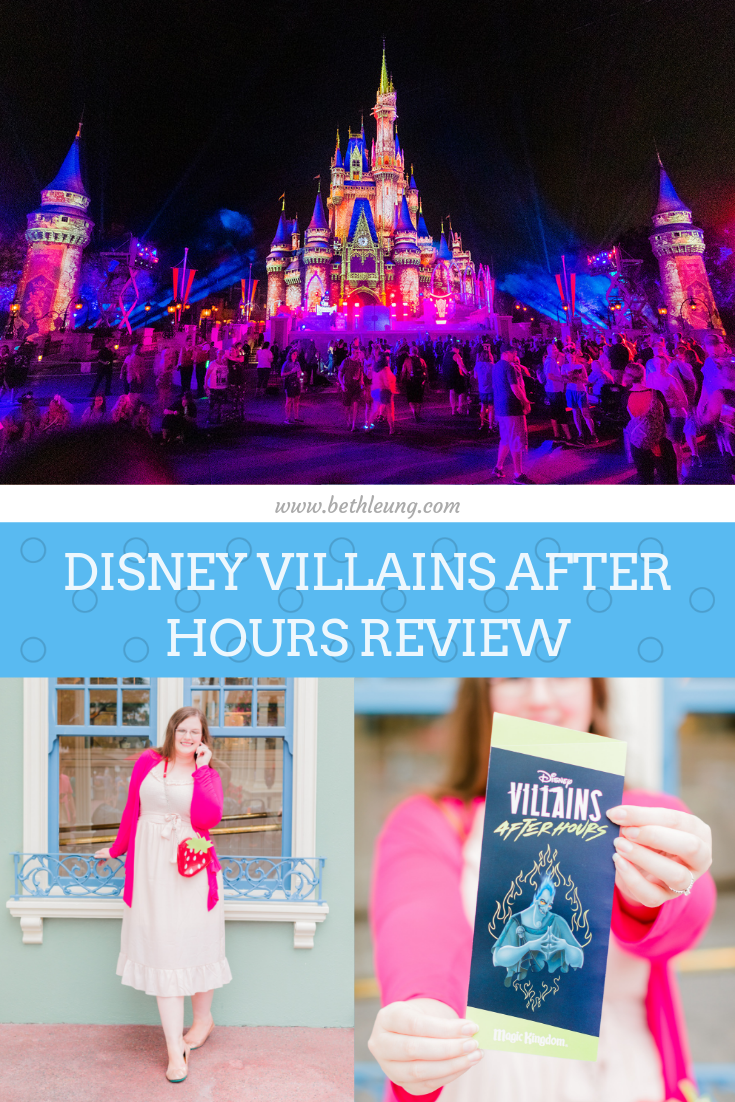 So first, let’s go over all the deets you’ll need to know.

Villains After Hours will run Thursdays (and Monday for the week of July 4th) throughout the summer with the last party held in early August.

This means you’ll have 10 nights to choose from, but tickets are very limited to keep crowds manageable — and we wouldn’t have it any other way. But this means you definitely need to grab them while you can.

So how do you get tickets? The easiest way is to purchase them online direct through Disney.

Otherwise you can also call or visit any WDW Guest Services Window. Advance purchase is $139 plus tax, but if you wait until the day of that price goes up to $144 plus tax.

And don’t worry, being an Annual Passholder or DVC Member will save you a bit, but only for advance purchase tickets. Those prices are $109 plus tax. 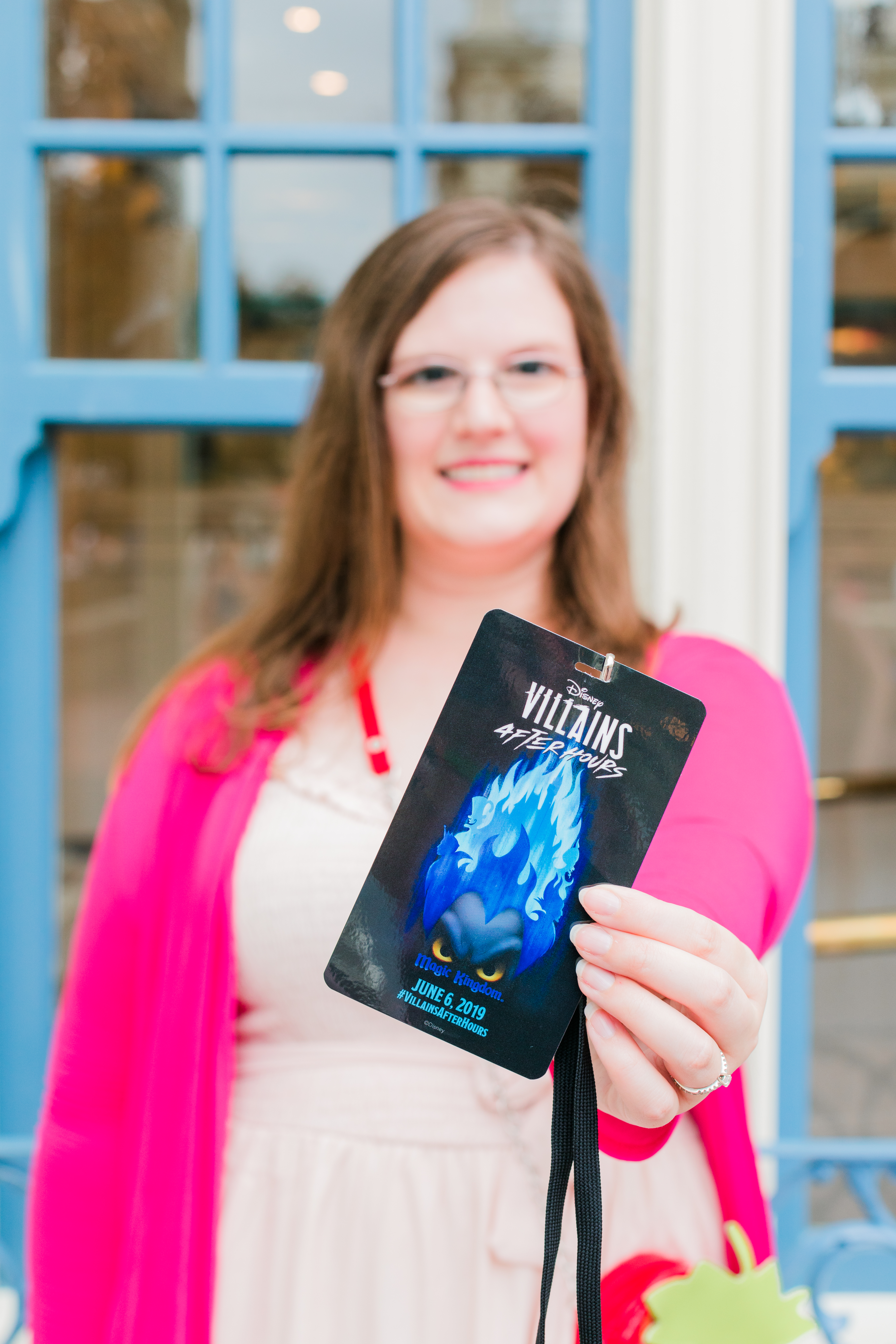 What’s included in your ticket?

A special event calls for a special outfit! Disney encouraged us to dress our villainous best, although costume guidelines need to be followed.

You guys know my aesthetic is anything but villainous, so I decided to channel the pinkest, cutest villain I could find as my style inspo!

Know who I am? 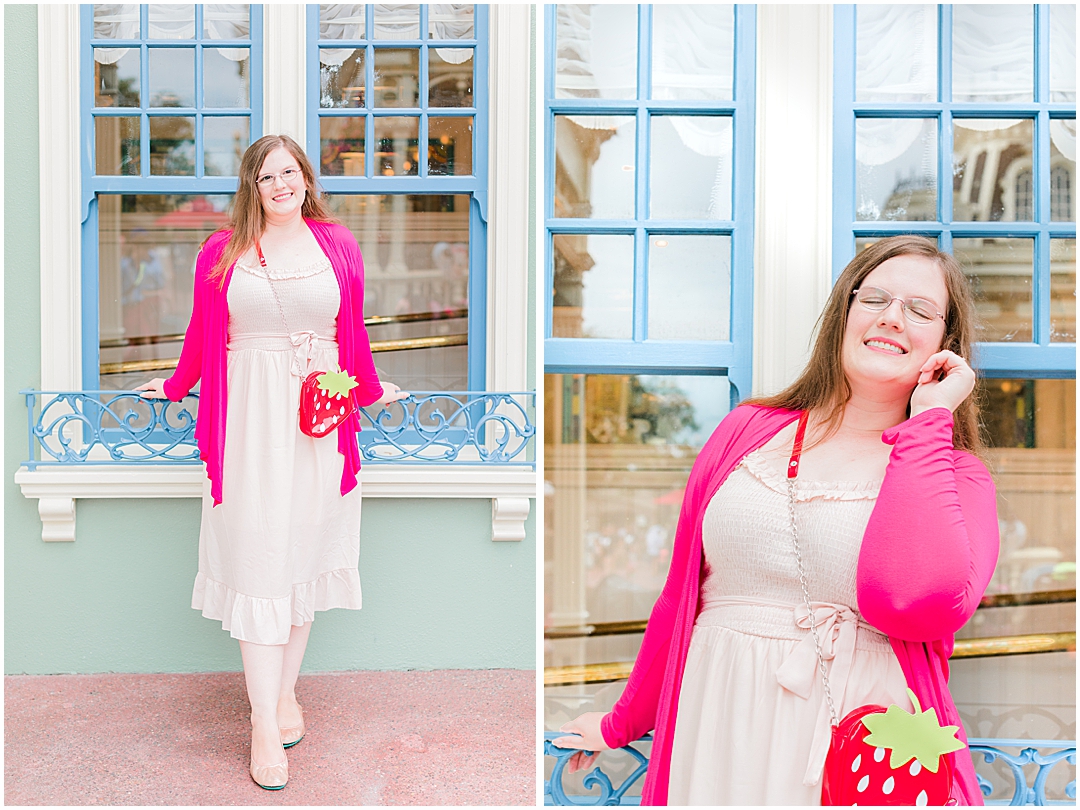 We arrived just as Happily Ever After was ending and a flood of people made their way towards us. As they exited the park though it quickly became virtually empty.

Even though you get a decent amount of time in the park, it feels like it goes by super quickly! Definitely plan out your night ahead of time because there’s no way to see and do it all at only one event.

We prioritized that we wanted to try as many event-specific things first and then enjoy a few rides at the very end, even though almost every ride in the park was walk on. 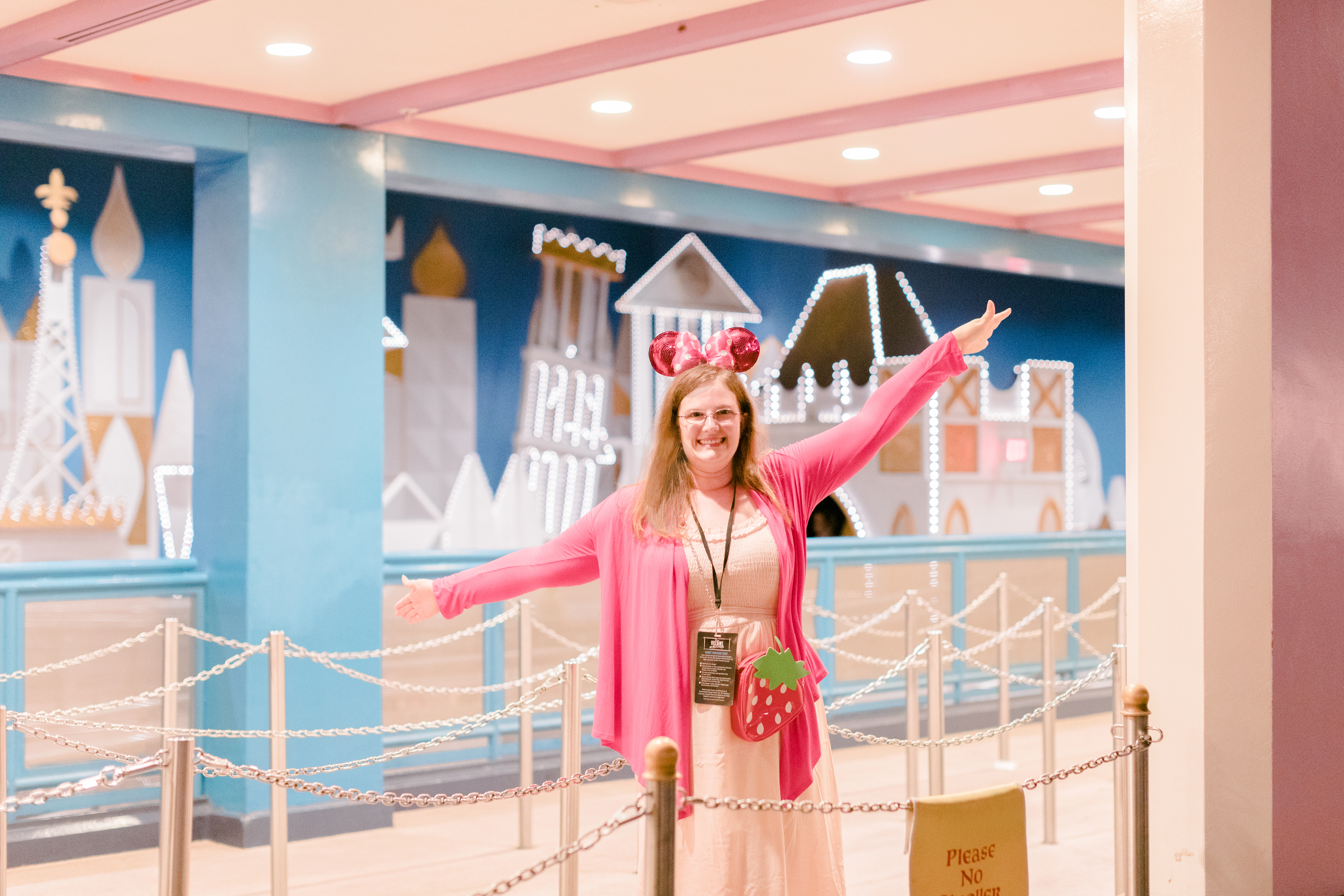 Passing through Fantasyland, it almost looked deserted. It was tempting to stop and ride some of our favorites, but we carried on to Adventureland so that we could experience the special Pirates of the Caribbean overlay first.

The wait for Pirates was considerably short, with live actors hanging out in the queues with the guests. Having never been on Pirates at Walt Disney World before, I didn’t quite know what to expect, but it was fun getting to see Captain Barbosa and his crew mixed in along the attraction.

Once we got off Pirates we were off in search of some snacks.

There were six brand new themed treats to try in addition to returning favorites such as Evil Emperor Zurg’s Noodles and Not-So-Poison Apple Cupcakes.

With time being limited and the treats being fairly scattered throughout the different lands, we were able to work through half of the new menu.

My personal favorite was the Dragon’s Breath Float, lemon soft-serve with cherry syrup and Sprite, but I also really enjoyed the Hades Temptation for the fun theming resembling the cocktail he sips in the movie!

And because it was basically violet lemonade in a new form! 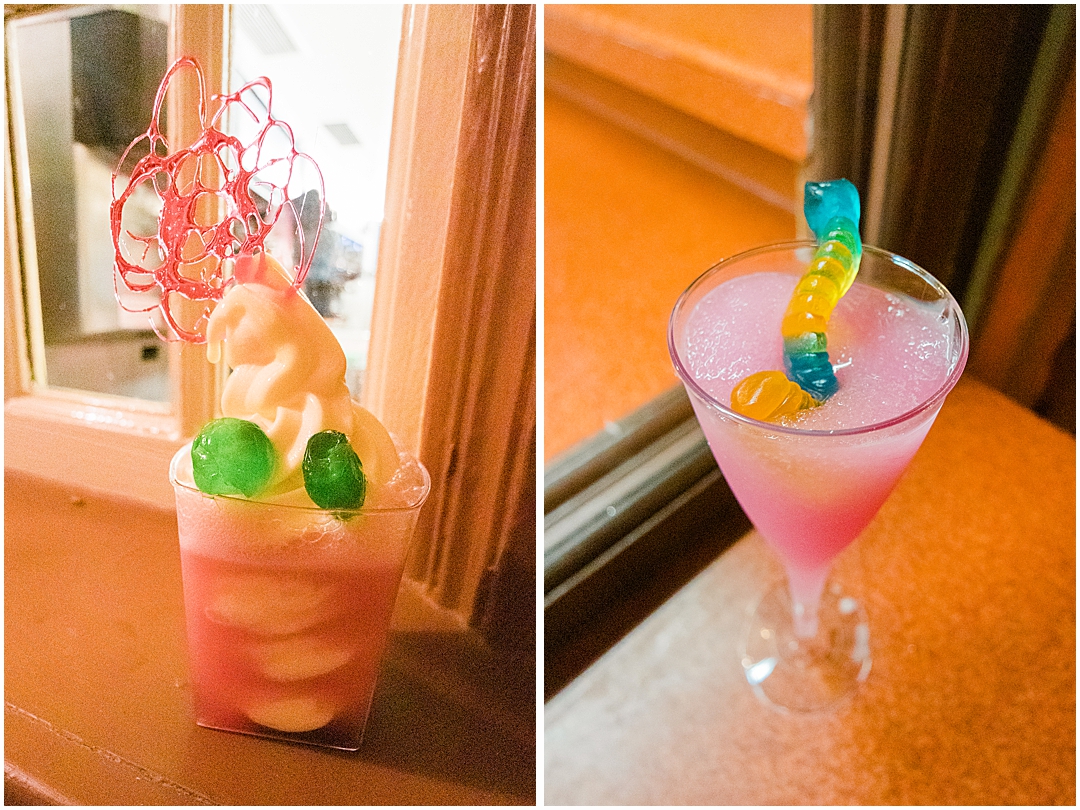 If you don’t want to pay extra to try any of the new treats (although I highly recommend you try at least one) your ticket does include all you can eat Mickey Bars and popcorn, so make sure to take advantage of that.

The snack carts were sprinkled throughout the park and lines were never more than a minute or two. We grabbed a couple of extra treats at the end of the night and a few bottles of water to keep hydrated since it is summer after all. 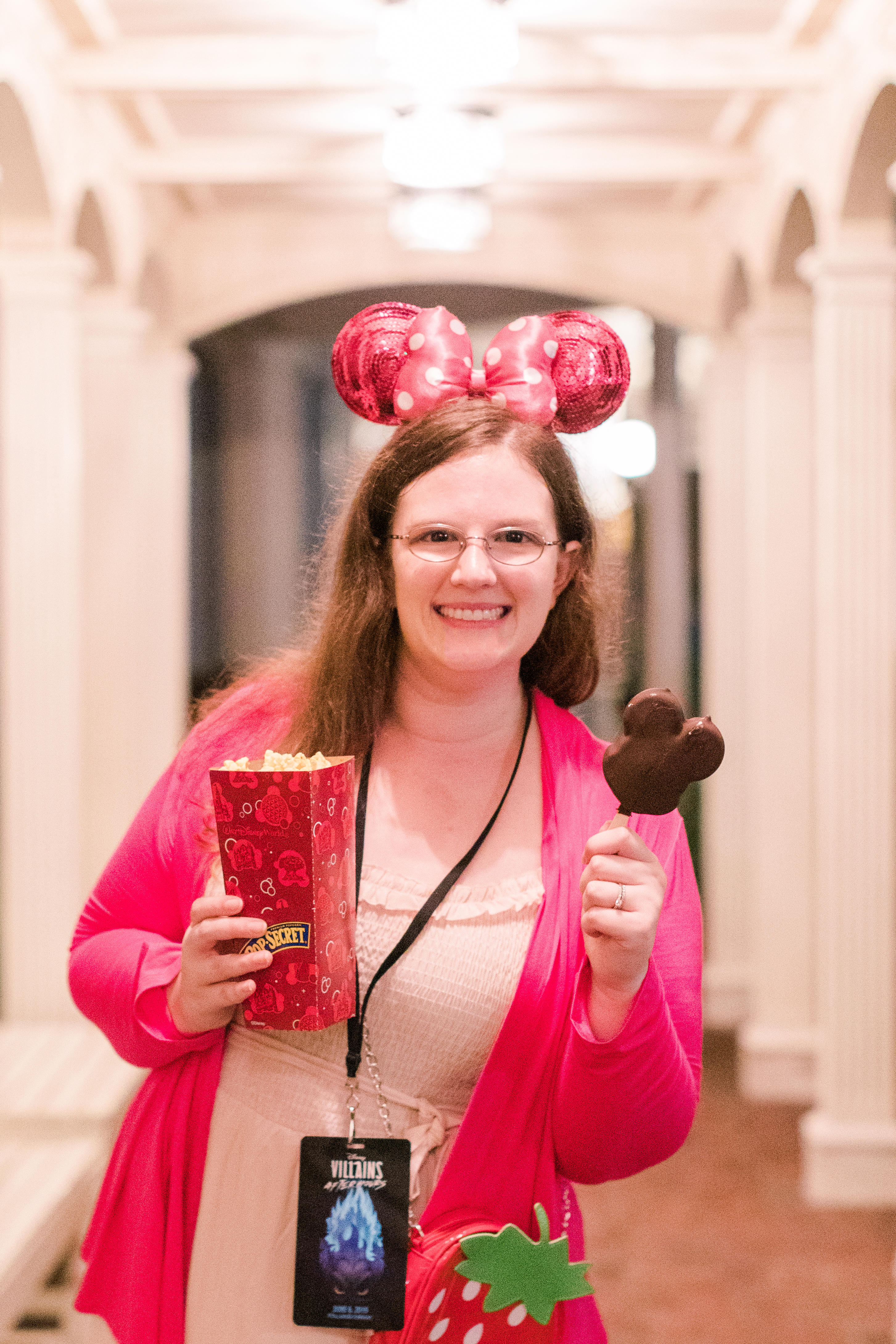 After being loaded up on sugar we made our way into the nearest gift shop to check out all of the cool event-exclusive merchandise.

There’s so little villain merchandise as it is out there, it was really fun to see so much villains-inspired goodness in one spot.

And while I might not be the most villain-loving person, I absolutely loved the design for this event with Hades being the feature and other baddies being subtly silhouetted in his hair. I knew I needed to get something to bring home with us! 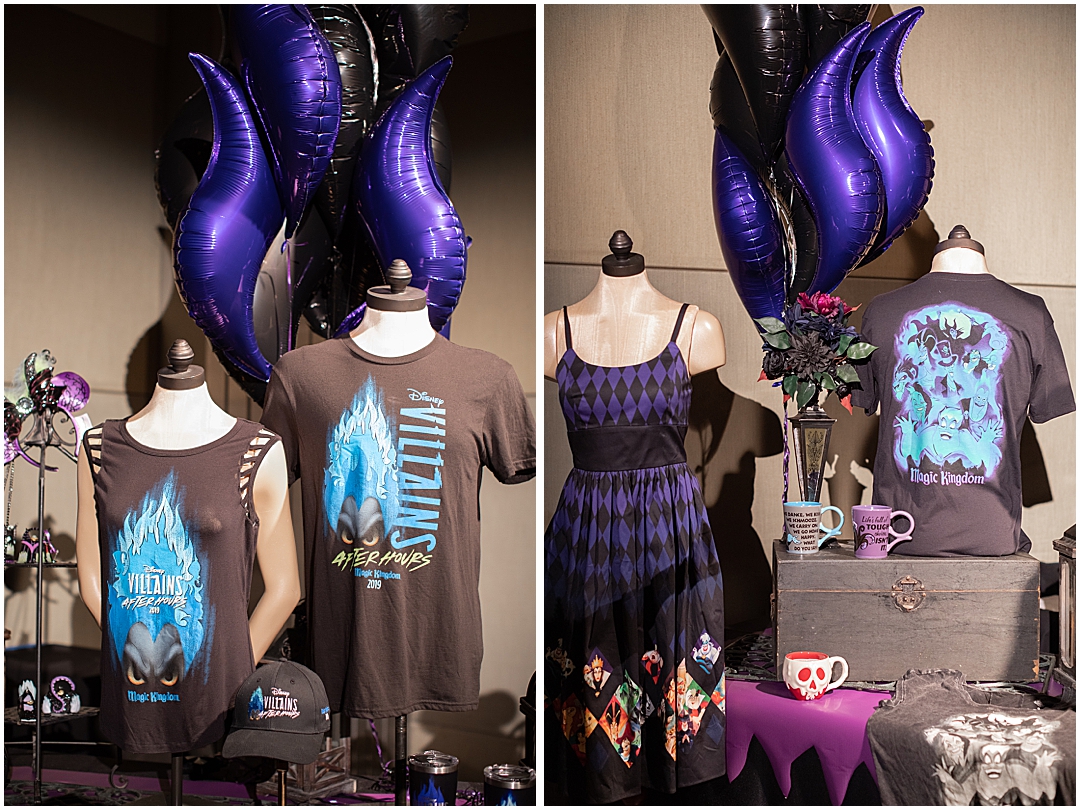 With our stomachs full and our wallets a bit lighter, we made our way over to check out the debut of Villains Unite the Night, the special stage show for the event.

The show runs three times throughout the evening and features Hades and Meg alongside other favorite Disney villains.

The castle projections throughout the show were downright spectacular. I loved all of the details they added in and how it seamlessly transitioned from one villain to the next. I mean, seriously?? Look at these gorgeous overlays! 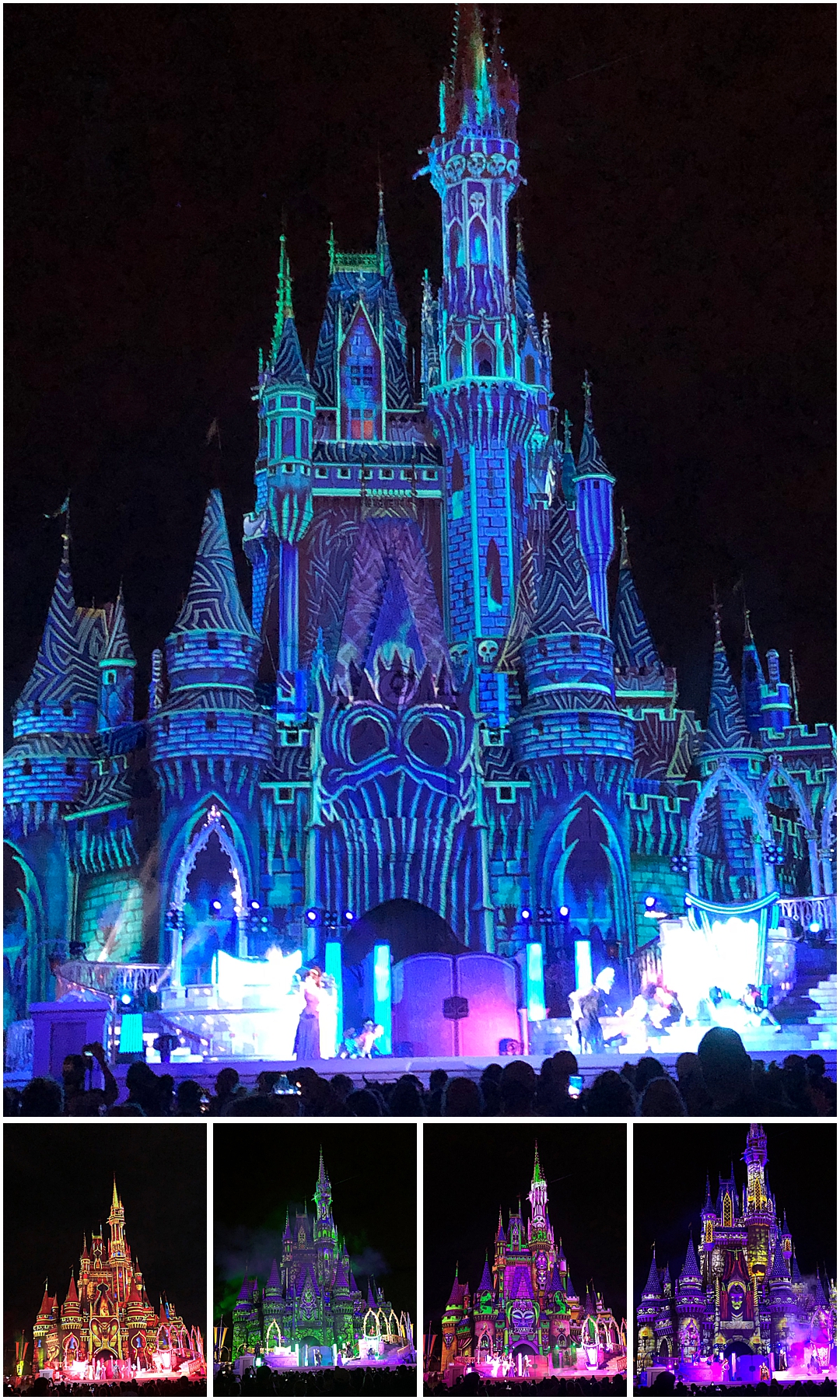 I couldn’t even pick a favorite if I tried!

After the show ended we beelined to grab one last ride. We chose Seven Dwarfs Mine Train because it’s a ride we’ve never been on before– the line is always too long and we can never score Fast Passes for it, we knew this was finally our chance.

I think everyone had the same thought because it was the longest line of the night, but I’ll take a fifteen minute wait over the normal two hours any day! You could probably wait even less if you went earlier in the evening, we but seized the opportunity to finally enjoy this ride.

And I loved it! Especially in the dark, it felt so thrilling and was the perfect end to our night.

Leaving the park we had a special farewell from even more villains at the train station on the end of Main Street. They were hilarious!

We stopped and stayed a few minutes as they bantered and bickered, interacting with guests in such a fun and playful manner. It was really cool because most of them are villains you rarely get to see, like my favorite Gaston! 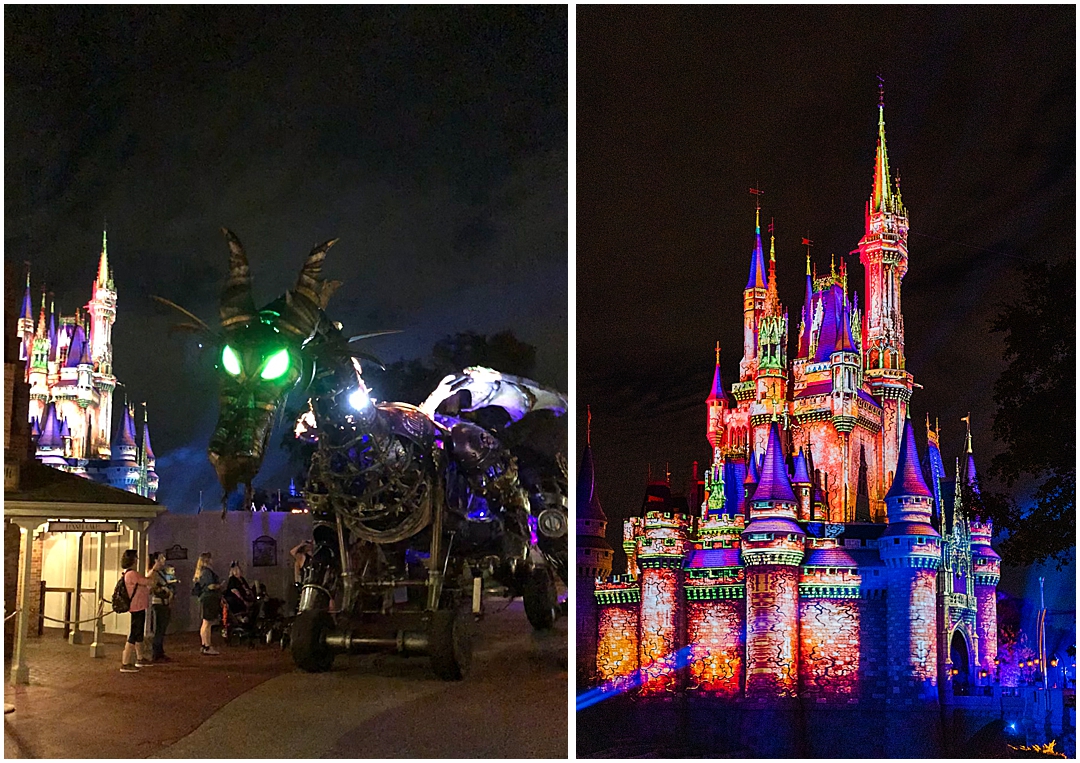 Villains After Hours – Is It Worth It?

I honestly was a little skeptical of the Villains After Hours event before attending. After all, the ticket prices seemed a little high and I’m not really a fan of villains… but you guys, I had SO much fun.

Disney did an amazing job from fun entertainment down to all the smallest of details theming this event.

And I mean when else do you get to see Maleficent in dragon form roaming throughout the park?! When we saw her approaching it was one of the highlights of our evening. The atmosphere was just contagious in the best way possible. 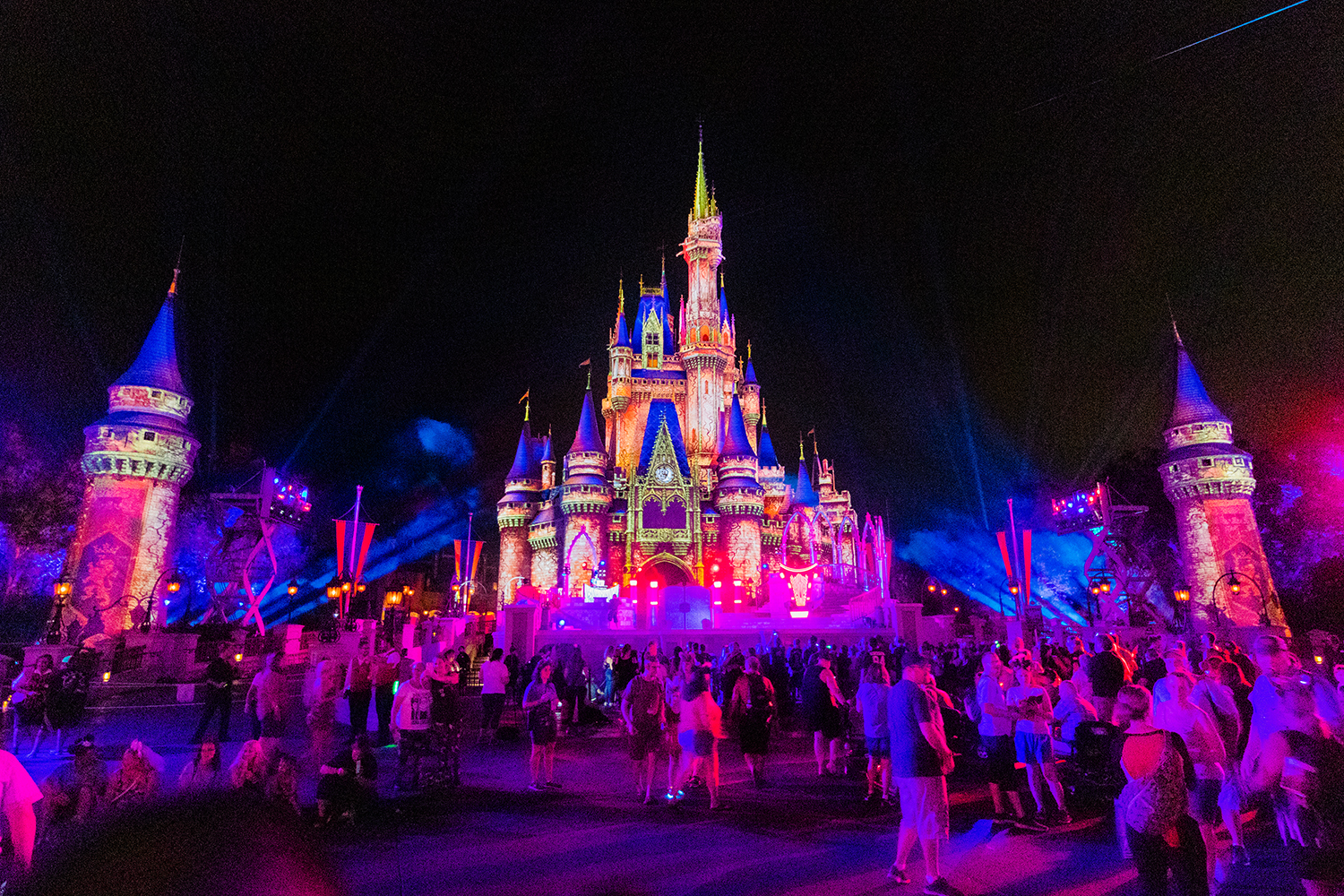 If you love villains this event is obviously a no brainer! It’s rare for Disney to celebrate being bad (other than at Halloween) so this event is perfect for anyone looking to tap into their inner villain.

I would also say this event is perfect for anyone with limited time and really wants to focus on riding everything! Let’s be real. Summer is hot and lines are miserable this time of year. Getting to run around a nearly empty Magic Kingdom was a dream!

And also if you’re extra like me and also just love Disney for the photo ops, I’d say go! It was so fun getting to take pictures people-free!

I know I’ll definitely be looking into more After Hours events in the future.

A very special thank you to Disney for inviting us to this event. Having the opportunity to work with them is incredibly special and a huge reason why we chose to move down to Orlando in the first place! I am so glad I get to bring you guys along for the ride ✨

Make sure to check out our vlog from the event here:

Have questions about the event? Don’t hesitate to reach out and I’ll be happy to answer or put you in touch with someone who can.

Villains After Hours runs select nights from 10pm – 1am: